A Site About Mr. Children, But Also Much More 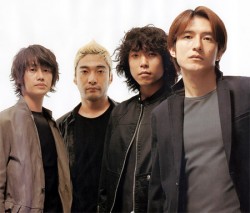 I was just talking to a friend about Mr. Children and here I find a site dedicated entirely to the band. Mr. Children English Fansite is run by Ijah and I think it’s a fascinating site/blog. It is not regularly updated, but that is fine by me after reading what Ijah has to say about the band.

The latest post is a review of the December 2010 album Sense. The review addresses many concerns that you’d expect for a band that has released fourteen albums and thirty-six singles. What stands out about it? Ijah describes Sense as an “adult album” that doesn’t concede to the pressures of commercial responsibility (that said, it did sell well). Where does it rank compared to the rest of the Mr. Children discography? One of their best albums, although not their crowning achievement. For me, the review was a great as it tackles these “what does it all mean?” type questions, and it does so without losing personality or sounding robotic.

And then there is Ijah’s story about discovering Mr. Children. This is a must-read. It’s not just a tale about her finding the band and what it means to her. It’s also a biography about Mr. Children, one that talks about about their formation, their rise to fame, mainstream success and international influence and reach. Sure, in today’s world, anyone can find and follow any band that they want to. Ijah did so in 1999 and in what sounds like a culture in which there was little presence of Japanese music. It takes a special type of band with a special type of appeal to gain fans in such circumstances.

Ijah describes the appeal of Mr. Children: they are down-to-earth, true-to-their-roots, and, what stands out the most to me, “ordinary.” Many times, I’ve read similar reasoning to explain the appeal of (post-80s) idols and idol culture. The ordinariness isn’t meant to imply dullness (although sometimes…). Rather, Mr. Children is “ordinary” in that they are normal people, albeit normal people who just happen to work really hard and be very good at what they do. But doesn’t that describe basically everyone in their everyday lives? There was no pretension of celebrity or superstardom with this band. It doesn’t mean that they didn’t want to be a huge success, but that the success wasn’t going to fundamentally change them. Is it all an act? Maybe, but who cares, you are enthralled with the band and their music and not their “true selves.” If there is anything that would explain their “Japanese feel,” it’d be this ordinariness.

I highly recommend this blog and and these entries, even for people who don’t care about Mr. Children. They are great examples of a person that is very interested and affected with a piece of culture that is foreign from their own.