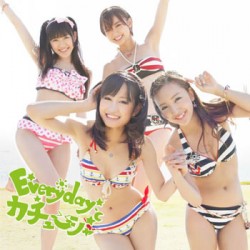 So it’s official, AKB48 has set some major records here, dethroning both Mr. Children and Pink Lady in the process. Everybody breathe in, breathe out, let loose with one more victory whoop at the brave new world we now inhabit, and get ready to bow down to our new Jpop overlords.

I gotta agree with Gaki of PIH when he wrote, “It makes no difference if you are a fan or not of this group, what they are accomplishing in this current era of record sales trends is impressive and deserves respect.” And I agree with Melos that congratulations should be extended to Aki-P, since this strikes me as a success of marketing more than anything else. Marketing, folks – this is a record industry metric being achieved, not proof positive of some aesthetic standard being set.

I had an extended conversation last night with some folks over whether or not AKB48 “deserved” to break such monumental records with this single, and the conclusions I came to can be found on my Twitter account. I’m very proud of AKB, and I sorta-kinda understand the objections of rockist types who are confounded by this overwhelmingly popist development – or, to be even more blunt, the defeat of rockist idealism to the realities of a free market. However, it IS a triumph of marketing, nothing more and nothing less, and we should all now focus on what’s most important, the results of the senbatsu and the ascendancy of Kojiharu to the throne.

But wait, a couple of closing thoughts to place this achievement in greater perspective:

Second, I’m pretty sure the gap between Mr. Children’s sales and AKB48’s sales is larger than the sales figure of Morning Musume’s recent singles.

So once again, congratulations to Aki-P and AKB48 and all the fans who helped make this possible! Wota, start saving up for senbatsu 2012 because you know you’ll want to top this record next year! Mr. Children, start arranging for photospreads in Weekly Playboy to try to regain your place in the record books! AKB idols, start spending all those extra profits you earned on the single on limousines and fancy bling! And economists, play close fucking attention because the answer to global recession is now in front of you! Aki-P’s over-franchising of the 48s is indeed meant to save the world!