By Ray | May 09, 2011 | Comments Off on More Thoughts On Morning Musume’s Tenth Gen Auditions 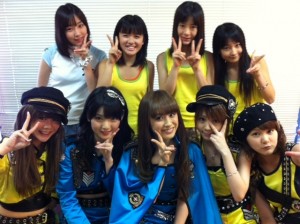 Celestia and Greg provide some very thoughtful opinions and conjectures on  the surprise announcement from yesterday, going into a little more depth now that the news is sinking in.

Celestia’s guesses for what Tsunku seeks in tenth gen is intriguing in that it seems to take Riho down a peg or two, and her predicted schedule of the tenth gen audition and rollout seems pretty spot-on.

Meanwhile, Greg has a rather cynical take on the upcoming audition process and what he sees as a possible double graduation at the end of this year. However, I think the saying, “Scratch a cynic and you’ll find a disappointed idealist” applies here, as what Greg really wants is the addition of more fully-developed talent into the Morning Musume roster, and from there an elevation of the idol group’s musical accomplishments. Though if we consider his stated view that the idol business is indeed a business, perhaps UFA have measured the cost-benefit ratio of hiring talented older girls and simply deemed it too expensive or financially irrelevant, given the group’s current stature and fan base.

(As a caveat, I unabashedly count myself among those “Others [who] just want more jail bait to drool over,” as Greg puts it. But I think that’s because I have an even more cynical, id-based view of the idol world than Greg, and you don’t wanna know what you get when you scratch me.)