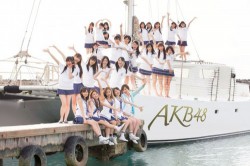 ‘Everyday, Katchyusha’: A Step Forward, A Look Back

Dae Lee has a vividly written take on the new single and PV from AKB48, finding it a more energetic progression of what the group has been doing in recent releases. Careful attention is paid to the artistry and craft behind the video, especially with the way it weaves together references to past PVs from AKB48. However, Dae finds that the sheer volume of allusions weighs down any coherence in the narrative – which, if you think about it, is a frequent risk of self-consciously postmodern works of all kinds.

That said, other idol groups have previously reached a point where they also did a strongly self-referential video – off the top of my head, I can think of Morning Musume’s “Do It Now!”, SweetS’ “Bitter Sweets”, and Perfume’s “Secrer Secret”. In each case, some kind of transition was being marked – the departure of the original ace of Morning Musume, the imminent end of SweetS as a group, a shift away from the cyberpunk-esque look and sound that defined Perfume under Nakata until then.

As a result, I can’t help but wonder if this is meant, even subconsciously, as a signal from AKB48 of changes within their own group. Certainly, AKB has been in a constant state of change – with that many girls, how can it not be? But the new policy of the theater shows as well as the growing number of soloists and subgroups and even franchises may all be leading to some critical mass, some massive redefinition that Aki-P has up his sleeve. Or maybe it’s even simpler than that: with the AKB world being as complex as it is now, is it a surprise that there will be nostalgia for simpler (though not necessarily happier) times?

I remember when “Aitakatta” first came out and I wasn’t even sure the group would last. Now, watching Acchan ride a bike takes on an almost iconic aspect because of that early PV, a testament to how much the group has achieved. Which may well be another possible reason for the allusions: a victory lap of all they’ve accomplished, as they now set their sites on world domination. And the boat setting off full of idols? They’re the shock troops introducing us to our new overlords.