A Tongue-In-Cheek Look At Disgraced Idols 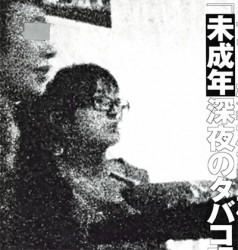 Where are they now: Disgraced idol edition ~part 1~ – aramatheydidnt

As a sort of tribute to Hey! Say! JUMP’s Morimoto Ryutaro, Sticky Tricky and Bang BANG of aramatheydidnt takes a humorous look at four idols who have disgraced themselves in some manner and where they are now. The good news is, all four of the idols chosen are still very much in the public eye. The better news is, Sticky Tricky shows how easy it is to poke fun at their expense.

We start off with Kago Ai, because you can’t say underage smoking scandal without thinking of ol’ Smokey herself. In describing the arc of Kago’s rise and fall and further drop and a little climb back up and yet another drop down, I can’t help but think that she’s been actively inviting trouble with the decisions she makes. It isn’t so much one wrong step as a whole tap dance of bad judgment for her, and the latest development seems to bear this out.

And then, the best segue ever: “In what universe is smoking worse then a shotgun wedding? THIS ONE!” Which of course leads to Kago’s other half in W, Tsuji Nozomi, who is doing just swell at the moment. Shotgun weddngs by famous celebrities in Japan has become something of a cliche, so Tsuji doing it was just another case of an H!P artist jumping on an old bandwagon. Which may also explain why she’s come out of it smelling like a maternal bed of roses – getting pregnant in Japan isn’t exactly a scandal anymore, it’s fighting back the population implosion problem.

Having covered H!P, the article moves on to AKB48. Nakanishi Rina – or Rico Yamaguchi, as she calls herself now – is a bit of an anomaly since she “disgraced” herself AFTER leaving AKB48… But she certainly did it in style! And for those of you who are curious about just how swimmingly Rico’s career has been, check out ricoyamaguchi.com for a whole lot of feelthy pictures and DVD covers. I must admit, I was quite vocal about how pedestrian her first AV DVD was – she’s no Yua Aida or Sora Aoi, or even Maria Ozawa – but it looks like Rico’s loosening up and really making a go of it.

The series ends with Rina’s fellow Chocolover, Sayaka Akimoto. Her scandal wasn’t really much, and she came out of it unscathed anyways, but she was worth including for the old man jokes.

Of course, there’s so much more that could’ve been covered. Natsumi Abe’s infamous trifecta of scandals comes to mind, as does Murakami Megumi’s stalker, and really all the various times an idol was caught with a boyfriend, alleged or otherwise. But all this brings back to mind what AimxAim wrote earlier about how an idol’s post-scandal career depends on luck and popularity. It isn’t very difficult to bounce back from a scandal, as this post cheerfully shows – as long as the world still loves you and wants to see more of you. And if you’re a cherished idol, you’ve already got a running start in that department. (And even if you’re not… I mean, Arihara Kanna and The Mutou still have careers! How did THAT happen?)

There’s a part two promised, and that’ll be devoted to the boys. I would be very very surprised if a certain Goto Yuuki doesn’t make it there. What the heck, he should have a shrine devoted to the ways he’s tried to fuck up his life in as public a manner as possible. Maybe somebody should set him up with Kago Ai and see what happens. I’d bet on something that involves spontaneous human combustion, but I’m a dreamer like that.