Langdimus Prime of Your Opinion Doesn’t Count, Our June 2011 Blogger Of The Month 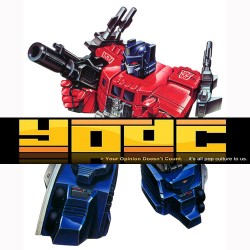 I am proud to announce the inaugural Blogger of the Month for International Wota, Langdon Alger a.k.a. Langdimus Prime, of Your Opinion Doesn’t Count.

As I wrote in the initial post, every month an IW Curator will choose a blogger deemed worthy of special praise and attention, and each of us will follow his or her own set of criteria. To start things off right, I wanted a blogger who was a longtime player in our short-lived wotasphere’s history, someone who had a clear philosophy behind his work, and is a close friend and ally of Intl Wota.

With all that in mind, there were a few people to choose from – but one stood out in particular.

(Actually, two. The other longtime contributor to YODC, Tsuji Eriku, has been as valuable a member as Langdon. I didn’t want co-bloggers of the month, but I don’t want to disrespect how crucial Tsuji has been, either. Tsuji is the heart of YODC, and Langdon is the head and spine. That is, Tsuji has done a great deal to set the tone for the blog, to give YODC its distinct identity, while Langdon has been the one posting on a regular basis, day in and day out for years now, providing the consistency and overall guiding vision that helps make any blog successful.)

For simple longevity, there are very few blogs in our wotasphere to rival YODC, which goes back to June 2005 and was a very different beast back then. Out of a myriad of original contributors, it was Langdon and Tsuji who took the broad popular culture focus of YODC and narrowed it primarily to Jpop and idols.

And from that interest, a particular attitude quickly emerged – one that is summed up by the not-so-subtle fuck you of the blog’s name. YODC – and Langdon in particular – is the GZA of our wotasphere, our Snake Eyes, our Wolverine. Langdon is the best at what he does, and what he does isn’t pretty. Sure, it involves lots of pretty girls, but there is a glorious vulgarity to YODC’s form of appreciation, a decision to objectify these women and not feel guilty about doing so.

As a result, YODC may seem like a lot of shallow testosterone-driven posturing to some, too smutty, too concerned with idols as sex objects. I’d argue that it’s important precisely because it provides that particular voice, that someone has this attitude – and unapologetically so – since it strips plain the truth that sex is what sells idols. Or to be blunter, that idols are merchandised sex, much like romance novels and lad magazines and alcohol commercials and teen comedy movies and so much else of what makes our modern cultural the delicious hot mess that we sink our teeth into with gusto and bravado.

I’m not saying that all fans – not even all male fans – see female idols in a sexual manner or sexually desire them. (I can name at least one male blogger who clearly has no such agenda, God bless him for that.) But not all of us in wotadom are saints, nor does the sinner class have many eunuchs in its ranks. The Japanese idol industry is as commercial and as mercenary a machine as any corporation, and what it sells are charming young ladies who sing and pose and do ridiculous things for our amusement. We may try to subjectify them, develop pararelationships that are perhaps a shade more realistic than talking to stuffed animals or playing with Barbie dolls – but they come to us, we are made aware of them, precisely because they were objectified in the first place.

While this may sound cynical, for those of us who accept these simple truths, it means we can let go of our inhibitions and allow idols to run chuck amok in our imagination, feeling no guilt for what we want to do to them and why. Sexy pictures of Rika Ishikawa were made to be drooled over; admitting to a desire to shtup a Berryz or two is like having a Kitty Pryde or Princess Leia wet dream. That torrid A Cup Fantasy of making a young Yamada Ryosuke dress up in the pink outfit Murakami Megumi wore in “Ookina Ai De Motenashite”, then performing Salo-esque rough trade on his pretty pretty face? That’s fair game too. A bit too twisted for even my YODC brothers, I’m guessing, but still okay.

That’s all because the subject of the real life person and the object of the idol performing on stage are two separate entities, at least for all the intents and purposes that a typical wota can have. The real person is never knowable, giving license to treat the idol the way marketers and merchandisers and managers want us to treat them: as much-beloved figures of lustful desire and snarky ridicule and bemused affection. Does that diminish our feelings for these idols or make them less genuine? I don’t think so. But it does place the wota-idol relationship in a very particular, very self-conscious context.

The way Langdon blogs on YODC is an operational reflection of these beliefs. YODC has expressed all these attitudes towards idols, voicing a wish to boink but also having fun with what that wish entails, what it says about us as fans as well as the idols as public figures. It is self-aware in its appreciation of idols, and unashamed of where that appreciation goes.

And with all that said, Langdon also appreciates Jpop music as music per se, apart from the whole idol industry’s flesh-peddling, and has been doing a J-Music Clip of the Week feature on YODC for most of its existence. Think about that: over five years of these weekly choices of music videos and performance clips, week in and week out. You can devote your time to going through these archives and get a pretty good history of several artists, including much of Hello! Project, Amuro Namie, and Scandal (all favorites of Langdon).

Equally important, YODC has never completely let go of its broader pop cult roots and there have been posts about video games, internet memes, toys, and unexpected chunks of pop detritus. (The Badass Series was especially memorable, including as it did Sean Connery in a diaper.) To my mind, this accomplished two things. First, it defined YODC as another voice for a particular watershed: the rise of geek culture into the mainstream. Over the course of a few years, we’ve reached a point where Comic Con is no longer just geek prom and superhero movies are big budget blockbusters, where a working knowledge of G.I. Joe and Hong Kong action cinema is no longer something one would be ashamed to admit. Patton Oswalt may be ambivalent about the rise of geek culture in this manner; for Langdon and Tsuji and myself, it’s a matter of wondering what took everyone else so long to catch up.

Second, the inclusion – even dominance – of Japanese idol culture in YODC’s content mix helps ease wotadom into that mainstreaming-of-geek-culture continuum in a way that I’ve found personally gratifying. This goes back to the importance of friendships in the wotasphere: the YODC crew would just as easily catch my broader frame of cultural reference – hip hop music, cult cinema, comic books, whatever else – as they would references to Hello! Project and gravure idols. They look at the world from the same angle, from the same skew of pop cult geekery that has defined me all my life. Langdon can post about Kana Tsugihara striking a pose from the cover of Ice T’s Power and that synergy can be thrilling. I can do a crazy cross-pollination such as Intl Wutang and know there’s at least one contingent out there who will get it. (Though it turns out they weren’t the only one.) It’s the Eltingville Club writ large and in kanji. As YODC’s recently added subtitle states, “It’s all pop culture to us.”

I would be remiss if I didn’t point out one last thing: the Pinoy Connection. Like myself, both Langdon and Tsuji are Filipinos, as are half of the current curators of Intl Wota, as were several other bloggers from the early days of the wotasphere (such as Thea of Made in Paradise and Johnny from The Mind), as are several other prominent bloggers in our wotasphere today. I’m not sure if we’re under-represented or over-represented in the wotasphere, but we are definitely representing.

And so, congratulations to Langdimus for all he’s achieved in YODC and will continue to achieve as we look ahead. This month IW will have an interview with Mister Prime himself, a list of his favorite posts from his blogging career, and maybe a surprise or two (perhaps… poetry?). So stay tuned!

3 Responses to Langdimus Prime of Your Opinion Doesn’t Count, Our June 2011 Blogger Of The Month