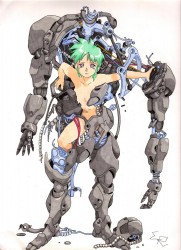 With the recent attention paid to AKB48’s Glico-sponsored creation Eguchi Aimi, Ryo decides to place things in perspective and give a quick history of virtual idols in Japan. He goes through idols from past decades, including Lynn Minmay and Kyoko Dateand and Hatsune Miku, sharing clips of each of them. He then looks briefly towards the future and what it may hold for idols and idol fans.

To me, idols have long had strong ties to technology, mostly because they are so commodified: idols are constructed and merchandised, just like a radio or DVD player. Instead of circuits and motherboards, though, we are talking idol personae and images and ideal femininity, all framed around the physicality of real young women. Instead of running on bits and bytes, the idol machinery runs on the desires and dreams of wota. And like a cyborg, the idol machine at its peak can blur the lines between what’s real and what’s manufactured: are the feelings one has for idols real, even if we never really “know” what they are like in real life? Is our devotion to idols compromised at all by the fact that we must consume various goods in order to express that idol worship?

But what if the physicality of those real young women wasn’t needed anymore? What if the construct could stand on its own, separate from the fleshbags of meatworld? That is at the heart of the fascination behind virtual idols – not just the addition of further technology, but the subtraction of humanity from the careful idol balance.

The PIH article is excellent, it makes for a great primer on the subject, and the videos help a great deal in tracking the evolution of artificial idols over the decades. However, I would’ve liked more exploration of the ideas involved. Ryo rightly points out that virtual idols is a way to make an ideal idol, to perfect the notion of idols by constructing one from scratch. This becomes even more portentous when you consider that idols are already themselves an ideal of a particular kind of femininity. But what are those ideals, and how are they refined in these artificial idols? That could have been teased out more. And how do the limits of technology define these ideals? Ryo points out the short hair on several virtual idols, explaining it was easier for computers to model at that time. Does that mean short hair becomes a de facto ideal, or that technology has failed us?

Notions of the artificial and virtual doesn’t have to rely on high technology, either. One thing that comes to mind for me is transsexuals. Mostly because I think about transsexuals a lot. But also because there are theories about drag queens and trannies as being the height of femininity, in that gender roles are artificially constructed and performed on an everyday level. What these precious package-packing princesses of pulchritude do is take the constructed performance of gender roles and amplify it immensely, sometimes to the point of intentional parody, often to create a hyper-feminine ideal that no real life woman could ever match.

Does this sound familiar? Are drag queens then really all that different from what idols are meant to be? Does that mean Korean transsexual quartet Lady is the idol group ne plus ultra of idol groups? And would this be a more humane alternative to the tech-based virtual idols, as it’s not a subtraction of physicality but a surfeit of physicality – i.e., the male-based organs that tranny idols possess, the promise of something a lot MORE real than your average wota would desire.

And so, while Ryo muses about the future of hologram handshake events with virtual idols, I’m going to look forward to the day Aki-P lets his first pre-op transsexual into an AKB unit. (As opposed to all the post-op ones in SDN48… Kidding! I’m just kidding!) When that happens, maybe I’ll officially declare my oshimen – or should that be oshiMAN?