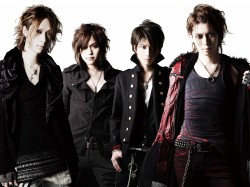 Despairs Ray Is No More – jrocknyc
Go translates the band’s farewell messages, as well as shares a pic from happier times.

The Eguchi Aimi Saga Continues Is She Real After All? – Pure Idol Heart
The main take-away I get from this is that AKB is indeed purposely trying to steal H!P’s thunder. Read that last fucking paragraph, folks.

Rainbow’s Jaekyung & Woori fart on stage? – allkpop
I have to confess, I’ve always wondered about that kind of situation and it’s great to see some idols be straightforward about it.

Why did Super Junior’s Leeteuk apologize to TVXQ’s Yunho? – allkpop
My first thought is, “Because Leeteuk came in Yunho’s mouth too quickly.” Alas, my answer was very very wrong.

Introducing the lovely ladies of Super Junior! – allkpop
How come Korea is great with transexual idols and lousy with simple drag queen idols?

Hump Day Eye Candy Extravaganza – Your Opinion Doesn’t Count
Does this make me a Reina fan again? No. But it does make me wanna buy her some tequila shots.

KAT-TUN to change their name temporarily? – aramatheydidnt
The original name change was going to be “Fuck You Jin We Never Needed You”, but Tanaka thought it too wordy.

When Will Yoshiki Faint Next (poll) – jrocknyc
Go shares the results of this important fact finding mission!

Maki Goto – Love – Selective Hearing
Greg likes the ballads on this mini-album, harkening back to her H!P days but still showing a more mature Gocchin.

Afilia Saga East 1st album and 6th single – bunny☆kaisui’s blog
If you don’t know who Afilia Saga East is, this post by bunny☆kaisui will fill you in. There is also a PV! Idols dabbling in witchcraft? Burn them!! Also, I noticed that girl grabbing the other girl’s phallic broomstick.

Everybody say ~Ebizori Diamond~ ♪ – Nino-baby ♥
More idols.. Shiritsu Ebisu Chugaku is on the same label as Momoiro Clover Z, but are so generic that I’d label them the antithesis of MomocloZ.

The darker side of K-pop – BBC (h/t omonatheydidnt)
This is a short video report on the contract situation for many k-pop artists. Ignoring the factual errors, it is interesting how a foreign broadcaster portrays the situation. It’s certainly not the type of publicity that the k-pop industry would want.

Does Captain Bear a Slight Resemblance to Nocchi (Perfume)? – Hello! Sekai no iken!
I don’t really see the resemblance at all.