After School Include Drumline Performance On Japanese Debut PV 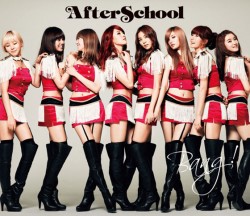 The official PV for After School’s Japanese debut single “Bang!” is out, and it is a remarkable, wondrous thing that you should take some time out to watch.

The main music video is actually a strong cosmetic improvement from the Korean original – the girls look more distinct, they got rid of that soft-focus froo-froo scene during the quiet bridge section that stuck out like a sore thumb. And yes, I miss the two little girls from the Korean version, and Bekah’s rap would have been better here. But overall, this is a great introduction of After School to the Japanese market, even if the pecking order – Kahi at top, Raina and UEE her lieutenants – is a bit too distinct.

What really makes this video stand out, though, is the drumline routine which opens up the video and lasts for roughly a minute and a half. They took the cosplay and made it into something substantial by performing like this – and it is absolutely breathtaking. After School did something similar before, with the tap dance routine for “Let’s Step Up” – and the music itself is taken from “Let’s Do It!”, which was the opening track on the Korean single for “Bang!” (which I listen to as much as the lead single itself). Stepping up like this is a risky move, to say the least – they’re no longer just trying to look sexy in those outfits, they’re living up to what those outfits are supposed to be about. It would be like Morning Musume sailing an actual boat for “The Peace!”, or AKB48 setting a real village on fire in “River”.

This routine was undoubtedly edited to make the girls look more skilled than they actually are, and I’m not at all sure if they could recreate this live. (Though please please PLEASE prove me wrong here.) However, they still had to master the basics and get the trick moves worked out. So I’m not saying they’ve suddenly become a top-notch marching group – but they learned it, they clearly put in their time, and they showed what skills they possessed to excellent effect.

What makes me especially appreciative and respectful of After School is that the tap and drum routines are a different way to reinforce a sense of cohesion and unity in the group. Both evoke groups beyond idols that are known for relying on working closely together – tap dance troupes and marching band drumlines – whose very RHYTHMS must be in sync or else they fail. Along with the magnificent music video for “Shampoo”, this gives an aura of discipline – not quite fetishized, but conceptualized in a unique manner – which is quite distinct from other girl groups out there. Considering this was a group that initially compared themselves to the Pussycat Dolls, this is a huge step forward for the way idol groups can project strength and empowerment.

Which doesn’t preclude some friendly competition, of course – the AS Blue and AS Red singles were just released, after all.

And it does make me wonder – it’s easy to imagine other Kpop girl groups doing something similar, like KARA and especially SNSD. But could AKB48 pull something like this off, or any of the Hello! Project units? I get the sense that a tap or drumline exercise would just be played off for laughs, that there are too many weak links in your typical Jpop group who just wouldn’t hack it. (Ongaku Gatas doesn’t count – that’s reverse-engineered from futsal to idol unit instead of vice-versa.) It may be the difference from the train-them-into-entertainment-machines approach of Kpop idols versus the any-girl-can-be-a-star ethos pushed in Jpop idols. And it may be another reason why the hallyu has grown in popularity so much.