Deciding What Makes The Sexiest PVs 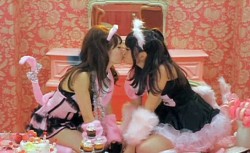 It’s a slow, slowwww day so far in the wotasphere, so why not have a little fun? This Recochoku poll is something I’d usually just ignore – except by usingthe word ‘sexiest”, my radar went up for a few reasons. First, any attempt to define a superlative is problematic; we all lapse into it, but consensus is a bitch. Second, the term “sexiest” is even more problematic for me since I’m a firm believer that sexiness is a very subjective matter. What trips one person’s trigger will probably not trip another person’s. Sure, there can be some agreement – but only in the sense of sexiness being reduced to certain expectations and tropes.

And so, we come to this list. I have no fucking clue why Lady Gaga is in there, but whatever. I distinctly remember hating RIP SLYME’s “Nettaiya” because it was such an obvious, pandering break from their more innovative PVs. Yeah, the girls are sexy, but the bigger picture just ruined it for me. The Koda Kumi pick is interesting in that it’s the only one I can agree with even half-heartedly, more for its cleverness than anything else. It also propelled Kuu-chin into the spotlight in a big way, and she’s been doing one sexy video after another, or so it seems, leaving a mostly undifferentiated mass of exposed skin and writhing body moves to blur one’s memories.

And then there’s AKB48. They’re queens of the hill right now, the biggest thing in the Japanese music scene, so it’s not a surprise to see their most recent single (really? does the mere inclusion of bikinis really count for “sexiest”? oh wait, RIP SLYME already proved that) and the video which notoriously laid fan-service down with a sticky, semen-laden trowel. If anything, choosing that for the number one spot kind of offends me just because it shows a total lack of imagination, an appeal to the basest instincts of our basest instincts.

And sometimes, sure, I’m in the mood for that. But when superlatives and subjectivities are brought into play – well, it’s just no fun like THAT, now is it?

So I mused over the list some, fumed a little, and realized: when I think of sexiest music video in the idol world, this is what immediately comes to mind for me. Make of that what you will. (The funny part is, this is the “club” version of the video. There’s also a ‘sexy” version of the video but I find it a lot less sexy. Ironic, I know, but that just proves my point.) Stepping away from the classics, my second choice for sexiest video is this one, mostly because Hannah is there and there’s still the sense-memory of my jaw dropping at what I was witnessing.

If you’re looking for more traditional kinds of fan service, this video would come in next – I don’t particularly like the group or the song, but the performance strikes me as having an earnestness and even awkwardness that makes it so much more appealing than anything AKB’s ever released (sexy-wise, that is). And finally, if we’re going to throw in a random Westerner into the mix, this gets my vote for the sexiest non-idol non-Asian video of all time. Watch how Trent dances and moves around – this is like the quintessential hipster doofus in action and it is frighteningly hypnotic. Oh, how I wish there was a Dance Version of this.

So what just happened here? I disagreed with the Recochoku list and found myself making my own list in my head. So in that sense, the list was great – it inspired a debate of sorts, or at least a strong reaction. If you wanna share your own choices, that’d be great. If you actually agree with any of Recochoku’s choices, I’d love to hear that too.

Like I said, it’s a quiet day in the wotasphere. Let’s liven it up with our own versions of sexy.

One Response to Deciding What Makes The Sexiest PVs