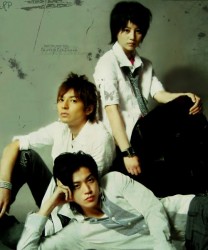 That said, I’ve never been shy about the sheer animal pleasures inherent in the idol world, either. I love the way it grabs me by the id and shakes you vigorously with strong emotional reactions to all these pretty boys and girls who I will probably never meet and most definitely will never truly know as people. I wouldn’t be interested in all the cerebral examination of idols if it hadn’t won me over so viscerally in the first place.

And that’s the charm of it, right? Idols provide this wonderful realm for our imagination, a place where one can indulge in all kinds of fantasies, skating the surface of these simulacra talento realities in a manner that would make Baudrillard and Jameson go all a-tingle…

Um. Anyways, with all that in mind, I was surprised and pleased when I read this essay from Isilie. What she does here is try to analyze something which really doesn’t need it: that there is value in watching silly, pretty boys acting silly and pretty. (Same with girls, of course, but for now let’s talk strictly sausage fest.)

Or rather, Isilie is trying to DEFEND this practice, and in doing so examines what the root of this interest may be. Which is understandable, I guess, in a world where you’re often told to better yourself and choose the finer things in life. But really, what could be finer than watching a beautiful older boy – nay, a beautiful young man – looking all dramaticky and noble and practically begging the audience that he be hugged and taken home? Oh, what fantasies that can conjure in any open imagination!

Yes, it’s sexist and shallow and objectifying and yadda yadda yadda – but it’s a silly, pretty boy doing silly, pretty things. Come on, have we gotten so cynical that this is something we have to EXPLAIN enjoying? Lemme tell you: when I saw KAT-TUN’s Junnosuke in Yukan Club (another drama comparable to Shakespeare, Coppolla, and the Pentateuch all rolled into one)… Well. I know all about that which Isilie proudly, valiantly defends.

And sure, there’s a time and place for these things. I remember once standing up and yelling at a screen, “Nino, I’ll take care of you and we’ll make sweet manly love forever and ever!” Then my wife forced me back in my seat and told me to be quiet in the theater until Letters From Iwo Jima finished.

But if there’s ever a perfect time and place for simple pleasures, Isilie clearly indicates, the original Hana Kimi was IT. And she does a fine job going through specific casting decisions and the way pretty-but-bad actors are balanced out by pretty-and-good actors, and how it’s all an elaborate fantasy (which should come as no surprise, given the premise). So whether or not a defense was needed, Isilie did a smackdown great job of delivering one, offering up the goods with both her head AND her heart.

On a side note, I’m glad to see Isilie devoting more time to her non-H!P blog – it hasn’t gotten much attention from IW, but I can certainly appreciate the desire to spread one’s wings and write beyond established comfort zones. More essays like this, and maybe it’s Itsumo Genki which will be thought of as “her other blog”…