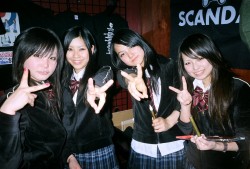 Anata-no namae wa?
My second post ever on YODC and basically the start of it all, as far as the Jpop invasion is concerned.

Uta Doki: Risa Wows The World
Probably one of my favorite posts EVER… YODC satire at its best, at least I think so.

and in one of the oddest comment threads on YODC ever…
There are certain posts on the blog that basically sum up what YODC is all about, I think this is one of them.

SIGHTINGS…Stalking Baby Sasquatch aka Poorwhitustrashus Mulletus
Another one of those very YODC type post… The thing about this post and the previous one is that they’re never planned, shit falls into our laps and we try to make that shit gold.

Pic of the Day “mmmmmm Sayummy” Edition
Sayummy… Don’t believe what other folks tell ya, Langdon created that shit.

J-Music Clip of the Week…Craig Edition
A personal highlight for me is when Craig joined YODC… I thought that this crazy fucker would fit perfectly in with the Magnificent Bastards and I was right! About the crazy part that is ;) .

Japan Nite 2008 – San Francisco: Part 1
One of those milestones in our blogging history, discovering SCANDAL.

..And He Who Drinks The Kool-Aid Shall Become One Of Us….OOOH YEEEEAH!
Another established blogger we were able to recruit from our little corner of the wotasphere was CJ… Getting CJ was like Hulk Hogan joining up with the Outsiders to form the nWo.

A Very Special Pic Of the Day..”1 Year of YODC Excellence”..Edition
I felt that our first anniversary slide show really summed up what YODC was all about… You could watch it and think afterwards, “Yup, that looks about right.”

Search: AX09 Posts
And the granddaddy of them all, the biggest moment in our short history was seeing Morning Musume perform LIVE in the US for the first time… It was truly a surreal experience.