Lots Of Kanons At AM2; Other Cons, Other Fandoms 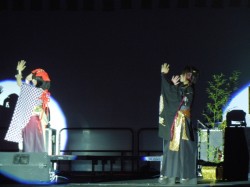 Greg continues his day-by-day reportage at AM2, with Day 2’s highlight being the concert of Kanon Wakeshima, followed by the first live stage ever of kanon X kanon – this being the duo of Kanon Wakeshima and An Cafe’s Kanon. Again, some great pictures from Greg: this time of the concert, as well as some very convincing looking cosplayers.

Meanwhile, halfway across the country and in a whole other kind of convention, Serenyty takes enough time off from attending Minnsota’s science fiction convention CONvergence to add her newest post to the 30 Day Idol Challenge. She asks innocently enough if other wota have other fandoms that they hold near and dear… But seems prematurely discouraged at the thought of that. After all, how can one make room in one’s heart for something more than idols?

Oh, but it’s easy enough, of course! If you have a passion for something, it can’t help but be expressed somehow. There are so many fandoms that are treasured by the wota you know! For starters, I’m a fanboy – a comics reader – for decades, and just this weekend started a comics blog as IW’s first sister site. (Should this be officially anounced? Nah, not yet.) Beyond that, let’s see… there’s wota whose fandoms include Muse, professional wrestling, vinyl records, video games, Hanson, Harry Potter, Smallville…

And I’m sure there’s at least one or two Doctor Who fans out there to keep Serenyty company. The most recent Doctors have been kinda hawt, after all, with none of that Tom Baker aging-pedo-in-a-scarf vibe to make one uneasy.