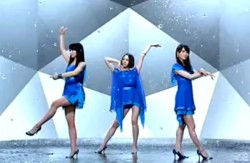 As awesome as Perfume is, there is usually a big drought before Perfume releases anything new or take part in a major tour. I like to believe it comes from a lack of being able to watch Japanese television on command. The girls have had their big run of popularity and I can only assume they are still as popular as ever. In fact, one of the hallmarks of popularity is commercials. All of their singles after Natural ni Koishite are commercial tie-ins now. So unlike Hello! Project where we get teased over a radio show that arguably only the core fanbase listen to, Perfume teases the entire nation on national television. And what a tease this is.

Tokyohive has the 15 second tease (don’t even call it a CM) for all you Perfume lovers. It’s quite a fancy tease at that. Obligatory leg shots of the girls, awesome dancing in water in heels and even slow motion shots à la love the world. Also I think this is the first time I’ve seen A-chan’s dress as high as Kashiyuka’s. Of course, Nocchi is not to be beaten and donned her trademark hot shorts for this tease. In fact with this new song, I think it’s about time for Perfume to gear up for a new album. Everyone let’s get ready to wait another half a year.