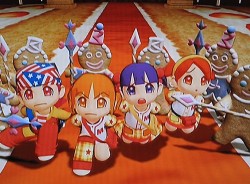 The “Lost” Minimoni Movie: “Okashi na Daibouken” – Madara Blog
Despite a weird definition of “lost” (my daughter’s watched it many times, so it’s not like it’s lost in our household), a very nice recap of this wonderful movie.

They’re on the right track, baby, they were born this way – aramatheydidnt
Oh God, I don’t know if this is a clusterfuck within a clusterfuck or a moment of pure zen bliss. Maybe both?

review: matenrou opera | “helios” (2011) – jrocknyc
This was something of a split decision…

Arashi’s latest album, “Beautiful World” sells over 631,000 copies in its first week! – aramatheydidnt
Congratulations to Arashi on their continued domination of the Oricon charts. Just ignore Acchan and her gang.

30 Day Idol Challenge Day 20 – Happy Disco
Serenyty only had one choice for this question, and we all knew it.

‘Limited Addiction’: Sophisticated Undertaking – New School Kaidan
Dae Lee again sings TGS’s praises but finds their youthfulness a huge detriment. I think he should learn to embrace the little girl inside him – no, wait, that’s coming out wrong. (That’s what she said!) Never mind.

Clip of the Day – Your Opinion Doesn’t Count
Nothing wrong with that, Langdimus, just so long as there aren’t any duct-taped gerbils brought into the mix.

What did Depraved Oppas do to Girls’ Generation? Part 2 – The Grand Narrative
At last, part two – with a lot of extra commentary along the way!

upcoming songs – Kira’s Blog
Clips of the latest PVs and previews, with some quick opinions for each.

Mayumi Yamanaka ~ Minisuka.tv DVD Gallery (Videos) – Jappydolls
Because you can never have enough Mayumi. Ever.

First Look At Todd McFarlane, Stan Lee And Yoshiki’s Blood Red Dragon. Drawn By Someone Else. – Bleeding Cool
From what I know of manga, the overmuscled American superhero look is cause for ridicule in Japan – especially because of the whole genitalia bulge thing – so Yoshiki asking for a lean-and-mean look makes perfect sense.