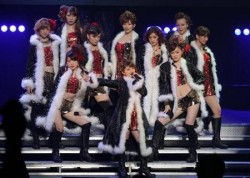 Dream Morning Musume- “Haru no Mai ~Sotsugyousei DE Saikessei~” Photo Book Announced – Hello! SayuNii
I hope they have photos of everyone backstage as they line up to kiss Yuko’s ring.

After School Blue reveals tracklist – Koreaboo
Lots of promo stuff about AS Blue, but here’s some meat and potatoes for you.

MINDBLOWN!! Didn’t even expect Kis-My-Ft2 to perform on Rollerblades! – aramatheydidnt
Shades of Xanadu! Which of these boys gets to be Olivia Newton-John and which one gets to be Gene Kelly?

Two of Japan’s cutest representatives collaborate: AKB48 x Hello Kitty – aramatheydidnt
There should be a tag-team match between these collaborators and Yoshiki / Stan Lee. I’d bet on Hello Kitty being last cat standing.

(title unknown) – Happy Disco
This is the second time this week I’ve seen a dictionary definition of charisma used to defend an uncharismatic idol. (But I still love both bloggers!)

[Updated]Berryz Koubou, C-ute, Mano Erina, S/mileage Releasing A Special Song Titled “Makeruna Wasshoi!” – Hello! SayuNii
Morning Musume was going to be included, but then they realized Takitty was still around and thought better of it.

AKB48 24th Single Janken Tournament Preliminary Rounds – MELOS no Michi
I love it when idols are flexing their wrists even moreso than their wota.

SCANDAL: LOVE SURVIVE! – Pure Idol Heart
Fresh off their successful showing at AM2, the newest video from the girl group rockers.

Arashi to send out a message to the world – yonasu.com
Originally the message was “We’re here, we’re Arashi, get used to it.” But Satoshi thought it was too obvious.

DIR EN GREY Announces North and South American Tour! – aramatheydidnt
They’ll explore as much of this hemisphere as they need to, in order to find somebody who likes their latest album’s title.