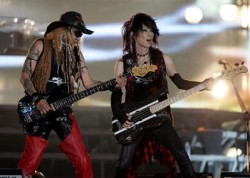 Former X JAPAN’s TAIJI passes away – Shattered Tranquility
A huge tragedy in the world of Japanese music, made even more so by the history of X Japan.

GP Basic celebrates “Jelly Pop” comeback with a cake – allkpop
Only afterwards were they told that the special cake they ate was made of Soylent Hannah.

[Review] “One More Chance” by CSJH-Dana & Sunday – allkpop
An excellent review that covers the group’s history and stature, as well as the influence of the SM sound on their comeback release.

Memory Lane – Special Generation vs. Ai no Dangan (part 2) – Berryz Kobo International
Berryz fans are always looking back to their early days. Perhaps because they were so much better when they were much more pedo…?

Afilia Saga East: A Must Watch Idol TV Experience ~ Pure Idol Heart – Pure Idol Heart
All Gaki’s talk of show-hijacking made me wish these idols flew the show to Cuba for political asylum.

Marks no Yama – HamsapSukebe
Akiramike saw perfection within reach, but this drama doesn’t quite make it.

MONKEY MAJIK donates nearly 13 million yen towards disaster relief – Tokyohive
MONKEY MAJIK wants to remind everyone Japan is still facing the hardships from the Great Touhoku Earthquake back in mid-March. So everyone, even if you can’t help out, don’t forget.