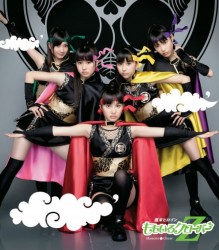 Momoiro Clover Z Shiori Puts Hair On The Line – Pure Idol Heart
I guess bald idols is going to be a fad for this autumn.

SDN48 Perform In See Through Clothes!! – IXA Ready
And the next trend: singing in ever-increasing levels of undress.

NMB48 [Zetsumetsu Kurogami Shoujo] 1st week sales, bloomers are a no go – MELOS no Michi
See what I mean? It’s not like NMB48 even lost that bet, but they did a song in bloomers anyway.

Japanese girl-group “E-GIRLS” hailed as the “Japanese SNSD” – Koreaboo
There’s no way they can have a member who’s thirteen and be properly compared to SNSD.

Reactions to the S/mileage 3rd round auditions – Janakya Mottainai
Our blogger of the month AimxAim has some strong opinions on the auditionees, and of course isn’t afraid to share them.

KAT-TUN-Run For You 2nd PV preview – Janakya Mottainai
Hospital or mental institution? I like these options!

Twitter Update: Lizzy = AfterSchool ❤
At least half of After School are reading this book. It’s like Kpop’s answer to Harry Potter.

It’s YODC’s 6th Anniversary Charlie Brown! – Your Opinion Doesn’t Count
The last of the reunion posts (I think?) has the surprise we all kinda thought would happen.

Korean Gender Reader – The Grand Narrative
The part about Super Junior makes me laugh, and there’s many other interesting links too, including Piggy Dolls.

KARA’s Seungyeon cries over kittens on her new show, ‘TV Animal Farm’ – allkpop
That’s cause she knew she had to kill the kittens by hand for all the fans fapping to thoughts of KARA.

Mitsui Aika and Sayashi Riho Have Been Advised To Rest For A Few Weeks – Hello! SayuNii
Two members sidelined! Well, let’s just say one-and-a-half in terms of usefulness, but we wish them speedy recoveries!