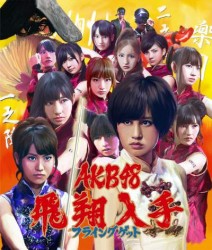 AKB48 Flying Get PV Pictures – IXA Ready
And some pics of AKB from the set of the PV! It looks to be quite Shaw-tastic!

SNSD and Kara have a rivalry in Japan? – Koreaboo
It ain’t a real rivalry until they break out the switchblades. Hint, hint.

AKB48 Spots Lotion CM – IXA Ready
“The wota puts the lotion on its foreskin and then it strokes the hose.”

Translation: After School’s Japanese Premium Party Interview – AfterSchool ❤
Another great interview with the group – and we learn who has a fondness for Hello Kitty!

S/mileage to release yet another single – Janakya Mottainai
Our blogger of the month AimxAim thinks this will be too soon for the second gen to make a debut.

MomoClo takes a page out of Passpo’s book – Janakya Mottainai
Our blogger of the month AimxAim thinks too many of these gimmick challenges will make them less special. I dunno, a whole bunch of bald female idols would seem pretty special to me no matter how many are included.

Passpo fly into the summer – Janakya Mottainai
AimxAim is loving this video, but does wish it could be a bit more summery in theme.

ZONE tribute album covers + official tracklist – aramatheydidnt
Here’s a pair of covers – and tracklists – that has me very excited!

[IV]Anri Sugihara ~ Anri Sugihara’s Life – Jappydolls
I was very impressed to find out she did pro bono work as a lawyer AND teaches blind kids to ride bicycles!

bump.y’s new flawless PV for Kiss! – aramatheydidnt
I have to admit, this is VERY cute.

30 Day Idol Challenge Day 26 – Happy Disco
Serenyty finds solace in one of her idols being something of an idol-crazed wota herself.

Photos from “LIVE STYLE 2011” – Namie News Network
Some great concert shots of the queen of hip pop doing her thing.

Eguchi’s official photo was stolen from AKB Theatre – aramatheydidnt
So was it a disgruntled fan upset at being fooled… or Eguchi herself, emerging from cybperspace to reclaim her identity? I vote for the latter.

T-ara thanks SNSD for paving the way in Japan – omonatheydidnt
I can imagine BoA shaking her head at this.

It’s Finally Over – Raffi’s Awesome Blog
Raffi finishes up a H!P-centric 30 day idol challenge. Read all of it here

Morning Musume do Something Worth Watching – Wotaku Now!
Welp, I know what I’m downloading next.

Gravia idol Kumada Yoko to debut as a novelist – aramatheydidnt
I love how gravure idoling can be just the first step for these women.