The Image of Music 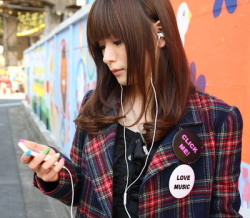 This short piece raises a lot of questions. Here we have mekimigure discussing musicians and their image. She is particularly disappointed with artists getting away with subpar quality music simply because they can. They can because of their image to the consumers.

Image has long since been one of the grandest and most important elements of entertainment. Yet doesn’t it seem contrary to the concept of music? After all music is purely auditory, is it not? But then it would fail to sell itself in the competitive market established today.

The entertainment world in Asia is practically a melting pot of images, styles and music. Japanese idols today are challenging new images beyond the traditional idol archetypes. Korean idols are staying true to their image while they promote in Japan, allowing the Japanese to truly hear and see a wide range of entertainment.

I’ve noticed myself the popular trend in my own university is Korean music. On one end of the spectrum, everyone loves the sexy mature image and sound of Korean idols. Whereas it seems that these people tend to refuse Japanese idols. “Too cute. Too high-pitched”. Japanese music has no merit and falls on deaf ears. On the other end of the spectrum we have those who can not associate themselves with any good Japanese music because the image is not suitable to their tastes.

And that is the problem here in music. Do we let image blind us from quality music? Are we just allowing ourselves to listen to anything from Korea because it’s cool and hip? Mekimigure makes a good point. Image is important. We’ve all heard the saying, “you can’t judge a book by its cover.” Well, we certainly shouldn’t be judging an album by it’s cover art.