A Kpop Group With Biracial Members 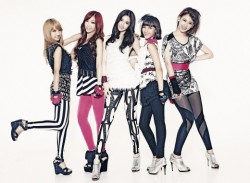 Another week, another new idol group from South Korea. 2011 has seen dozens of new groups. As a result, it’s becoming increasingly difficult for these groups to stand out amongst the crowd. The natural solution to this is to attempt new gimmicks and concepts. We saw it with Piggy Dolls. We saw it with Teddy Riley’s involvement with Rania. And now we see it with Chocolat.

In a few weeks, Chocolat will debut in the kpop world. They are being promoted as South Korea’s first girl group that is comprised of biracial members. At omonatheydidnt, member theeastsea rightly points out that this is not true – SM Entertainment’s Isak N Jiyeon had Ida Dene Simmons as a member. theeastsea does a great job of compiling Chocolat’s information into one location. They are definitely a talented group. Although, realistically, none of their dance or introduction videos are that different from any other rookie group.

This is where the hook of the biracial members comes into play. For a while now, the kpop world has been multinational. Jia and Fei of miss A were both born in China. Tiffany and Jessica of SNSD were both born in the United States, and that’s kpop’s most popular girl group. There are many, many other examples. Multiracial members is relatively uncharted territory. Thus, it’s going to garner attention for a debuting group.

Maybe I’m too cynical, but I expected to see loads of discriminatory and nationalistic comments around the Internet regarding this group. I think that I was expecting this because of the fact that so many people are flipping their shit over the new Spider-man, Miles Morales, who is both gay and biracial. In both the cases of Miles and Chocolat, they do not fit the perception of what their respective roles “should be.” This is great, but often causes disgusting backlash. I can find these types of comments if I look on Youtube, but that’s Youtube for you. Interestingly enough, if there is any backlash at all, it’s over the fact that two of the members are 14 years old. The age of these members is barely noted in the promotion of Chocolat (unlike GP Basic, where it is the main attraction). In either case, they are definitely making a bigger impact with their debut than Leader’s or Swincle did.

There is a problem that I do have though. An overemphasis on the background of these members could lead them to becoming caricatures. If they are to be successful, certainly it will be because of their performance skills and ability to connect with crowds and fans. Being portrayed as That Biracial Group, as if that is the only reason why they exist or are relevant, is quite demeaning. I hope that it doesn’t come to that.