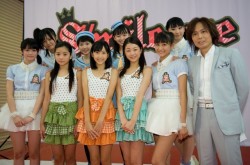 So for those who haven’t heard yet, the announcement was made at today’s Hello! Project concert that there are five new members added to S/mileage… except they’re called “sub” members, meaning they’re provisional and in a few months it will be decided which of these five will remain in the group and become full members, and which ones will hit the road. While the news of second gen members has been long anticipated, helped in no small part to the live streaming of the audition process, the whole sub aspect of these choices has been received much less favorably and cast something of a shadow on the wotasphere.

Ado of Hello! SayuNii gives profiles on each of the new members as well as muses on the nature of the results.

Isilie of Itsumo Genki is less than exuberant about the results and notes the obvious similarity in making such a huge addition to the group.

David of NSK is quite eloquent in his reaction, initially excited by such a bold move but then taking a step back when finding out about the “sub” status. To quote, “That’s the real the discussion here. The air of indecision that comes along with this announcement. It’s the feeling that someone is trying to cover their ass should this be the deemed a mistake. Like someone is making sure that they have an escape route all planned out.”

Celestia of Bikkuri Project shares her opinion on each of the selections, focusing on their talent and how strong of an asset each will be for the group. Like David, she notes that it’d be pretty difficult to boot a “sub” member if she doesn’t pass snuff in several months. She also notes a whole other similarity to the process, finding S/mileage kind of… AKBified?

Serenyty of Happy Disco goes through a whole tumult of emotions, starting with “WTF are you doing Tsunku.” Seeing similarities to AKB’s kenkyuusei, she opines that the real test these subs are going to face isn’t in their talent but their popularity. As she puts it (and I agree a hundred percent), “I have a bit of a theory that any Japanese girl could become an idol if she wanted to become one, and vocal/dance ability really doesn’t make or break an idol ever.” And ultimately, she is less than enthused about all this, saying she is “a bit wary as a fan” and “hesitant”.

Gaki of Pure Idol Heart gives a quick rundown of the new girls then focuses on the evolving reactions of the original members.

Morningtime is fine with the results, but the reaction depends on the fate of someone who didn’t make the cut, Karin. Several others bloggers have also wondered what happened to several other contenders, most notably Karin (who’s also my favorite). The general wisdom is that she’s going to be part of the tenth gen of Morning Musume. At this point I honestly can’t tell if this is common sense or wishful thinking, especially considering how much this announcement feels like a sucker punch.

AimxAim of Janakya Mottainai thinks that putting the new members through this extended audition makes sense, considering what the original members went through. She also hopes that none of the five sub members makes the cut, though why she does is not expected.

J. Popping’s take is based on a specific view of idols and amateurism, and how S/mileage did not fit that model… until now. To quote, “So, once again, congratulations H!P. You took the one interesting thing about S/mileage, the fact that they were much too aware to be good idols and took that away.” So… they should have stayed as bad idols, then? If being seasoned pros is such a detriment (which I don’t necessarily agree with, though I can see where this premise comes from), then isn’t bringing in amateurs a good idea? And not all of them are rank amateurs anyways, there are a couple more Eggs being thrown into the mix.

Happy! Go! Lucky! has not changed opinion about adding new members, and points out that H!P “rarely pick the best ones”.

Chuu Sugoi Idol argues that Tsunku was the first to think of revolving groups and has only been able to apply this now. I’m not sure if either statement is correct, depending on how you look at it: on a practical level, revolvimg memberships have been around awhile (even before AKB, Onyanko Club, at least). And for all intents and purposes, I’d say the Golden Age Morning Musume was an earlier example of how changing memberships were used by Tsunku – though granted, this came from graduations and auditions, but for all intents and purposes it created the same effect.

yonasu.com didn’t see the need for these new members but nevertheless throws in its support for these subs.

I have some questions of my own. Will the tenth gen of Momusu also be subs? And if we keep calling these provisional members subs, should we call the established members doms? Because I’d sure love for Yuuka to be MY dom… I’m sure there are more reactions brewing in the wotasphere, and we’ll pass along the highlights as we become aware of them.