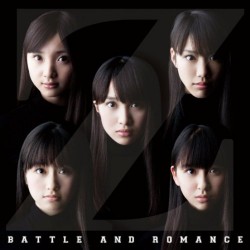 A “Quick” Review of Battle and Romance

Serenyty has a wonderful track-by-track review of Momoiro Clover Z’s first album. Track-by-tracks are far from my favorite kind of blog post, but they certainly are very useful in getting to the finer details of a musical release. Serenyty does an excellent job of navigating between her own reactions as a dedicated fan of the group and explaining things that a newcomer like myself would not be aware of. Also, she doesn’t go for a technical approach in examining each song but rather focuses on her reactions and the details of the songs that stick out for her.

The most interesting thing about her review is the palimpsest that is Akari – Momoclo Z has to pretty much erase her presence from the group (and even renamed themselves to mark the occasion), but still wish to pay respect to the departed member in whatever way they can. The results seem to alternate between the poignant and the hilarious – for the latter, there’s a roll call where a name is said EXTRA long to fill the gap where Akari’s would be – but I’d say that mix is pretty typical of the idol world in general.

As always, Serenyty writes beautifully, with a great sense of humor and a clear passion for her subject. That carries you far in any kind of writing, and makes this track-by-track an especially satisfying experience for me.