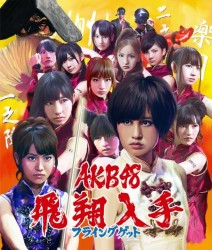 In news that has left the wotasphere all a-buzz, AKB48 has exceeded expectations with their new single and raked in over a million sales on the very first day, the highest they have yet to achieve. Keep in mind that the senbatsu CD racked huge sales but lower first-day sales than this, and the conventional wisdom was that the lack of vote ballot gimmickry bullshit to this single meant it would clock lower sales. Add to that the underperformance of AKB subunits at the hands of the superior male idols of Johnny’s, and the strong showing of “Flying Get” is indeed quite surprising.

Essentially the same coverage is provided by IXA Ready, MELOS no Michi, and Pure Idol Heart. IXA Ready wonders if this single will now overtake Morning Musume’s “Love Machine” sales number (very likely, in my opinion) while Melos and Gaki both feel sorry for that idiotic Passpo girl who either shaves her head or looks like a sore loser.

Think about that: “Love Machine” is about to be dethroned. By an AKB song. LOVE MACHINE. I wouldn’t call this a sign of the apocalypse, but everybody better start searching the foreheads of babies for 666.

Meanwhile, in the Junior Varsity division of the idol industry where sales are considerably lower, a bunch of people pissed and moaned when a little girl decided she’d had enough of all the idol bullshit and declared she’s Audi 5000 in a few days. This places the recently completed auditions in a different light, as it was apparently an attempt to fill the gap that Sakitty has been getting ready to leave in S/mileage.

I’ve been doing this metablogging for a long time so now there is a certain sense of… well, kabuki, for lack of a better term… when news like sudden Sakitty’s runner hits the wotasphere. There’s only a limited range of reactions that fans can have, of course, but as a result there are times when those reactions feel like rehearsed theatrics, like everyone was waiting to play their part and just waiting for the event to complete the performance.

There is the bare-bones recounting of official statements, to set the platter correctly for those who will follow. Hello! SayuNii, Tokyograph, New School Kaidan, and Pure Idol heart provide this. Of course, Hello! SayuNii goes above and beyond by including statements from all four OG of S/mileage. So I’d say that’s the one most of you would go for, while the other three will fit the tl;dr crowd better.

There is the wailing and gnashing of teeth. Chiima of Okay! Musume Time, mimicking various stages of gried like Denial and Anger and Bargaining (the threats at the end) in between some well-measured, thoughtful assessments of the situation and what it could mean for S/mileage and fans. What alarms Chiima the most – perhaps rightly, given how convincing she makes her freak-out – is the sheer number of H!P graduations going on recently. I’m tempted to mention that there was similar turmoil during Morning Musume’s Golden Era and that the addition of Momusu’s tenth gen may place things in more balanced relief… but it DOES feel like a lot of departures very quickly, even to a relative outsider like myself. (I can also be a complete and utter dickhead and allude to rats abandoning a sinking ship, then point to the Real News of The Day. But I won’t do that.)

There is the wailing and gnashing of teeth despite not truly loving the idol in question. Our new IW resident AimxAim of Janakya Mottainai and our own IW curator Siggy of Conflict Productions fit into this, who are both quite articulate and quite specific in explaining why this loss still matters to them. AimxAim does a great job in wondering why there isn’t an official graduation (my guess: management is pissed) and trying to take in the bigger picture. Siggy also has a particular axe to grind here, as someone who may or may not be as douchebaggy as I am with this post tweeted something that dismisses the emotional outpouring that Saki’s runner has engendered in H!P fans. It’s a very eloquent defense and I’m sure if the tables were reversed, Siggy would have been a complete gentlemen around somebody else’s own expressions of grief.

There is the popped cherry of first-time traumatic wota experiences. Dean of yonasu.com fits that category, as he’s never lost a favorite member before. It’s tough, Dean, and you may find yourself in tears at time – I was crying for a month when ZONE originally disbanded, though for some reason that only made my wife laugh at how stupid I was. But time heals all wounds, and other idols will hopefully fill the void. (And hey, I won’t even be a dick and suggest you look to AKB and their new million-selling single for a new idol to take your mind off the imminently career-deceased.)

There is the voice of wearied experience, who’s seen this all a dozen times before. I was expecting Selective Hearing to do this (you’re letting me down here, Greg!), though I also figured Celestia of Bikkuri project to provide the reasonable yawn as well.

However, Celestia does a clever head-fake and goes another route, to The light fisking of the official statement. Sne she does that to excellent effect, pointing out just how rude and mean-spirited some of Tsunku’s comments were, and how this may indicate a deeper rift and disagreement may have been going on behind the scenes. It’s an excellent catch, and certainly the part of the statement everyone probably most scratched their head over. That said, I actually wonder if that was Tsunku’s intention, in that maybe he IS just trying to place Sakitty’s Mad Dash To The Exits And A Sane Normal Life as a “childish” move because she is, indeed, a child forced to make a very grown-up decision. I can see the reason for animus against Sakitty, but at the same time saying “she’s just a kid, she doesn’t know what she’s doing” may be considered a kindness of sorts so she can avoid some flack.

There is the nostalgic look back through the magic of picspam. Chuu Sugoi Idol serves this up quite handily. Sakitty was quite the pedolicious babe, I now see, though she still doesn’t match up to Yuuka.

There is the airing of possible conspiracies. Our newest IW curator Serenyty of Happy Disco is noting the suddenness of the departure and lack of graduation pomp-and-circumstance in that light, though again I think it’s just H!P mannagement spitting on Saki’s self-dug career grave. Happy! Go! Lucky! also fills these Zapruder-esque boots quite nicely, playing devil’s advocate on scenarios where Saki was forced out, using observations on her apparently odd behaviors during the audition process. But while H!P Kremlionology is often fun in figuring out some of the weirder decisions handed down from on-high, that really doesn’t seem to be the case here, as is admitted by the end. That said, if stalker wota pics start surfacing in nine months of Saki pushing around a pram, well… Somebody gets to have an “I told you so”, right?

Personally, I find myself admiring Sakitty the way I admired Maiha when she left Berryz Koubo. Wanting to return to a normal life may seem unfathomable to wota and star-fuckers and others, but the idol life is very hard, Saki was practically robbed of her childhood in this quest for fleeting glory, so reclaiming what she can of a normal life is a smart decision if that’s what she really wants. And by all non-conspiracy accounts, she’s been agonizing over this decision for a while, so it’s not like she rushed into it willy-nilly. It just feels that way for fans.

And returning to the real news of the day, I have to say it’s amazing how AKB can overshadow H!P even when there’s no intention to do so. The only humiliation I had foreseen with AKB today would’ve been Passpo and maybe another drive-by bitch-slap at Mr Children just for shits and giggles. But in all seriousness, it looks like Morning Musume’s “Love Machine” is about to be overtaken by “Flying Gets” – and quite handily, by the look of things. End of an era or just plain endtimes, you choose your poison. I’m sure THAT will send some bloggers in a whole other tizzy when it happens, and we’ll be sure to take special note of that at Intl Wota as well.

Because schadenfreude is our new middle name here, even if we can’t pronounce it right.