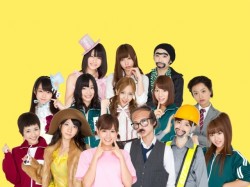 AKB48 Comedy TV Show Coming Soon – IXA Ready
Yeah, I used to love this show back when it was called HELLO! MORNING.

D-BOYS to stage Agatha Christie’s “Witness for the Prosecution” – Tokyograph
The idea started when somebody asked, “Who took my hair gel?” and they realized that had dramatic potential.

Sakurai Sho, Kitagawa Keiko to star in “Nazotoki wa Dinner no Ato de” drama series – Tokyograph
Call me crazy, but I think Nino’d be funnier as a smarmy butler.

Fantaken Flicks: Nana at the Nexen Heroes Game – AfterSchool ❤
I go into a positive swoon every time I look at Nana fondling balls like this.

SMAP Aid: In aid of what? – aramatheydidnt
Some questions raised about the charitable nature of SMAP’s new album…

SMAP, Son Masayoshi, Oh Sadaharu establish the East Japan Disaster Recovery Support Foundation – aramatheydidnt
And proof positive that SMAP are busting a nut to do everything they can to help.

Girls’ Generation “would definitely want to sing in English and make it like a worldwide record” – Koreaboo
Wonder Girls had a swing at it, so why not let SNSD try?

S/mileage have a herd of new members – The Blogpower!!!
Kath shares her opinions on the possible new members for S/mileage….

30 Day Hello! Project Idol Challenge – Day 10 – The Blogpower!!!
… and shares her hopes for a possible new member for that other group.

Freeter, Ie wo Kau eps 5-10 – HamsapSukebe
Akiramike examines how a show with a great premise is ruined by soap opera cliches.

Matsuzaka Tori strips down for his second photobook – aramatheydidnt
Based on his quote, dude likes to make amateur fuck films with his girlfriend.