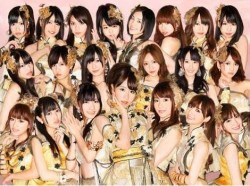 AKB48 – Flying Get 6th Day Sales – IXA Ready
AKB48 has officially beaten their own weekly record, with a day to spare!

Another day, another Perfume rumor. – BGM for modernica
Cait has a wonderful essay about trolling, rumors, and the Perfume fan community.

Girls’ Generation Sooyoung involved in a car accident – Koreaboo
Best wishes for a speedy recovery! Really, idols should just ride horses and stay away from those newfangled motor buggies.

FullMooN.13 DRAWING STARS PV – Pure Idol Heart
This is actually a GREAT video and pretty good song! Give it a chance if you haven’t yet.

Maou Part One: Serizawa vs Naruse – In Which Isilie Reviews
Isilie continues her wonderfully detailed analysis of the Ohno Satoshi drama.

J.Y. Park lands the leading role in new movie, “The Man Worth $5 Million” – allkpop
Another one million and they could’ve made JYP bionic.

Kis-My-Ft2 to tour five Asian countries in 2012 – MomoEdgewood’s Mediawatch
With Xanadu moves did Kis-My-Ft2 erect a stately concert at the Tokyo Dome.

STELLAR’s unique concept gains hot attention – allkpop
I’m figuring their advocacy of excessive gunplay and the overthrow of the state is their main marketing appeal.

Wonder Girls’ Sohee wanted to become an actress – allkpop
Hong calls it “changing her heart”. I call it “crushing her dreams”.

Pic of the Day – Your Opinion Doesn’t Count
Haw!

YG Entertainment confirms that Daesung will not promote this year – allkpop
But seriously? This was an over-reach and YG was smart to stick to their guns.

Twitter Update: Kahi – AfterSchool ❤
That first set of pictures looks like a flyer for a high-end strip club, doesn’t it?

Most likely knitting or singing along to Yasai Sisters. Or both.

View all posts by serenyty →