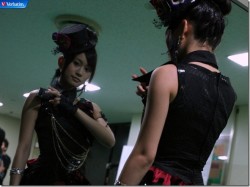 Do I see the same Acchan as everybody else, or has love blinded me? – Samurai Tamashii

Hayley’s post from several days ago stirred SagSousuke enough to revive his blog, Samurai Tamashii, in order to post a response. What he provides is as cogent and persuasive a counterpoint as any Acchan fan could ask for; together, these two posts do a good job of exploring the complex range of feelings that Maeda Atsuko can stir among AKB wota.

More than anything, I appreciate the civility in tone. There isn’t any resorting to ad hominem attacks or lapses of rudeness. Rather, specific points are quoted and addressed in detail, and differences in opinions are respected as being a fact of life. (I’d say that’s how grown-ups do it, but I read enough political blogs to know many grown-ups don’t behave this well on the internet.) SagSousuke sees things differently from Hayley, finding examples of Acchan’s desire to be in AKB and to be its front girl. The second-to-last paragraph was especially effective – I found it as enlightening as Hayley’s best points, providing another profound way to consider Acchan’s intended role in AKB48.

An excellent point is made about Acchan having sex appeal, and no words were really needed – just a perfect selection of eyecandy. I’ve always been on the fence about Acchan’s hawtness, though I do fondly remember her posing with fruits to excellent effect a few years back. SagSousuke also brings up something worth considering: like them or not, all the OG AKB members have worked hard and deserve our respect. Hayley wrote nothing to dispute this, but it’s another way to consider the debate.

The closing point is as close to a barb as we get, and had the benefit of making me think. If Acchan WAS different, more ebullient and less reluctant, would we fault her for that? I doubt Hayley would, nor would I. That said, I know being the front girl does make her a target for SOME other fans, no matter how she behaves, because they would rather see their own favorite in that position – or just see some variety in AKB’s line-up in general (which is where I’d stand). So I can’t take offense at that parting shot, since I know there’s a kernel of truth about the community at large. And it also goes a long way to show just how difficult a position Acchan is in, and how well she handles it.

Now that Samurai Tamashii has been revived for this one post, others will hopefully follow and the blog won’t remain dormant. SagSousuke’s got the writing chops and knows how to make a strong case for his beliefs; it’d be a shame to see it go to waste in the wotasphere.

One Response to Samurai Tamashii Writes Stirring Defense Of Acchan