By Ray | August 19, 2011 | Comments Off on Two Minutes Hate And Shmoos: Considering Itsumo Genki and A Solo Career For Takahashi Ai 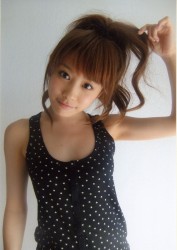 George Orwell writes of the Two Minutes Hate in 1984, which is a ritualistic way for people in the book’s imaginary totalitarian state to not only let off some steam but also be reminded of who their enemy is and why this enemy must be opposed. Now I don’t actually hate Takahashi Ai, but I dislike her enough that I think she should at least get a One Minute Dislike. As for Itsumo Genki and Isilie, I absolutely adore her and her blog so let’s give her that second minute and call it the One Minute Really Like A Lot.

Hopefully, ol George is spinning in his grave right now.

Even though she has a nice ass and you can imagine her pursed lips locked on one’s unit ecstatically during oral intmacies, Takahashi Ai troubles me because she is the triumph of competence over personality, a blandness that’s engulfed and ruined Hello! Project starting with MiniMoni and moving on to Morning Musume. Under her watch, Morning Musume has reached new levels of bland sameness, stirring raging soft-offs among wota who previously felt wood at the mere thought of the idol Love Machine.

There are those who adore Takitty, who point to her singing and dancing skills as proof she is a superior idol, who believe she is a world class beauty when all she really has is that ass and luscious lips.

The sad Truth is, Takitty is the Shmoo of the idol world. Pliable, ready to please, but dangerous because that desire to sing well and dance well belies a lack of real substance to her idol persona. She won’t die of happiness when we look at her hungry, but she will perform with her skill set and make us think she is giving us the equivalent of a tasty Shmoo steak.

And lke the formless Shmoo, she projects little beyond her competence, there is nothing about Ai that sparkles and shines on its own terms. She does not capitalize on her quirks, she does not play up her personality so they reach a proper idol-esque level of glamor or absurdity. If she is idol material, it’s a ceramic that has been smoothed and molded into an ashtray – utilitarian and not at all exciting. This ashtray-ness makes her impossible to relate to, difficult to fathom, and too boring to tolerate. We must take arms and make plain that –

Oops! Minute’s over! Now on to…

Isilie has a post on Itsumo Genki about The Disliked One, pondering the viability of Takahashi Ai as a solo singing artist. She isn’t sure if solo is the way to go, pointing out both the track record of H!P soloists and Takitty’s own unique disposition. Isilie clearly believes Takitty works best in a group, but does not need the pressure of leadership.

This well-articulated ambivalence rhetorically defines Isilie’s post: she would love to hear more of Takitty but cannot fathom what that would mean in terms of how she would present herself and what exactly she would sing. What is very clear, though, is that Isilie cares about Ai and is seeking the best fit for her. The solution she finally reaches makes a great deal of sense, and is certainly a step up. Whether or not that’s the path Takitty will eventually take, we’ll find out soon enough.

Now, a less sensitive fan would just go balls-to-the-wall defensive and proclaim Takitty can do whatever she wants, she’s great at whatever she tries, she’s Queen Shit Of Fuck Mountain, blah blah blah. But that’s sycophantic cheerleading, the mirror version of the Strong Takitty Dislike I trot out every now and again because it amuses me. It doesn’t add ideas to the conversation, just more noise. And while I love my noise, a true fan – such as Isilie – would be concerned with productive, realistic answers.

Isilie has been doing wonderful posts in both her blogs, and her passion for Hello! Project is still strong, still guided by a thoughtful intelligence. As a result, this post is worth a careful read, whether you’re a dedicated Takahashi fan or actually sane.

And time’s up! Thank you for playing, make sure to tip your wait staff!