Can Idols Change Your Taste In Music? 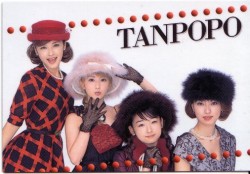 Has liking idols changed my idea of good music? Part 2 – The Blogpower!!!

With this second part, Kath digs a little deeper and gets more personal, confessing to enjoying the Beatles and how that helped her enjoy Morning Musume. From there, she goes onnt to describe the rather familiar story of how idol music makes her more music-minded friends leery of her and how it in turn opened up her own appreciation for other music.

Her main focus isn’t so much on how her idea of good music has changed, as in her attempt to find good music WITHIN idol music (i.e., the Beatles influence on Tsunku) and the way idol music seems to have damaged her credibility as a music fan. She notes at the end that it has made her more open to different kinds of music, but how far does that range? She says that her sense of good music hasn’t changed but she doesn’t want perceptions of credibility to get in the way anymore. (What I call “the cult of authenticity”, something rockists treasure a lot more than popists.) So does she use the same criteria as she had before idol music, or are there other criteria now in place as well? Is she still using Beatles and other similar groups as a point of comparison or favor, or will she now go, “Hey, this sounds like Morning Musume and I should try it!” (Or even, “Hey, this sounds like Slipknot!”)

If anything has molded my taste in music pre-idols, it’s noise rock, particularly the kind created by East Coast groups from the seventies and eighties like Sonic Youth, the Dustdevils, and Pussy Galore. Not being a student of music, I simply accepted this as the kind of music I enjoy and sought more like it. I knew it was different from other kinds of music – more prone to atonality, more beholden to feedback, more experimental overall. But when I hear something like, say, Pussy Galore’s “Revolution Summer”, that harsh skronk of the way the guitars are tuned doesn’t strike me as unusual or out-of-the-ordinary. Yeah, it’s pigfuck, but pigfuck is my source of sonic bliss.

This ended up bleeding out to the rest of my taste in music: the hip hop groups I most enjoyed were those who utilized noisy samples in unexpected ways (Public Enemy, Wu-Tang Clan, and especially the first two Cypress Hill albums). When I’m in the mood for jazz, I’d go for Borbetomagus nine times out of ten. And when I was looking for something new to listen to, Sunn 0))) was very much a revelation – not because they were so “weird” and “loud”, but because it felt like coming home again. Monoliths and Dimensions could easily be the summation of my romance with noise music, though the same could also be said of Pussy Galore’s Dial M For Motherfucker.

So what about idol music? Well, for starters, music ISN’T the main reason I’m into idols; that’s practically a mantra for me. However, I definitely appreciated its odd outsider status – like Kath, my love for idol music placed me on an even fringier range than my love for noise (which at least has some indie music street cred). And the music I most enjoyed by idols has played no small role in opening me up towards more mainstream genres, when before I was comfortably cloistered by noise and its offshoots.

More than anything else, though, I think idol music has made me appreciate sentimentality in a way I never had before with music. Noise is not a very sentimental genre – if anything, it tries to be ironic or even post-ironic. However, something as magnificently emotional as Morning Musume’s “As For One Day” (and that flute solo!) or the beautifully modulated sweeps of grandeur in just about every SweetS song created by the Bounceback/AKIRA team, or even the stark power of dream’s “Kono Natsu ga Owaru Maeni”… All of these could easily bring me to tears, could move me in a way music rarely did before then.

So idol music definitely changed me and how I appreciate music (and I actually wrote about this in even greater detail… holy shit, over six years ago?). It may not be the same way it changed others, but it’s certainly a crucial part of my development. And certainly, I can’t be the only one who’s felt the lure of idols and gazed into the abyss, only to find… well, you know.

(Though for my part, I must confess I absolutely love the retro Britpop influence of second gen Tanpopo but never ever really liked the Beatles.)

Also, considering some of the other recent discussions on idol music and the quality thereof, I have to wonder if idol music has been a detriment to anybody’s developing tastes? Has anyone become more forgiving of “bad” music or maybe more willing to overlook bad singing or the use of certain musical cliches because it’s so prevalent in idol music? After listening to Koharu long enough, does Ke$ha become easier on the ears?

For that matter, who else has done what Kath has and tried to find some common ground in the music they liked pre-idols with the idol music they now enjoy? Lord knows, I would LOVE to see an idol group use feedback and atonality in an interesting fashion, but that hasn’t happened and probably never will. Beat Laments The World had that wonderful countdown of guitar solos in idol music which showed Krv looking for flourishes that speakk to his metalhead identity. So it IS possible to dig up those influences and savor them, but where does one go from there?

Kath has done us a great favor by digging and then digging deeper. It’d be great to hear what others think of this as well.

3 Responses to Can Idols Change Your Taste In Music?