By Ray | September 21, 2011 | Comments Off on Happy Disco On The Morning Musume Risk Paradox 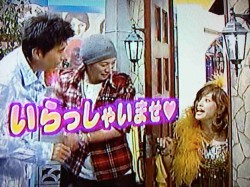 Here is a wonderful post from our own IW curator Serenyty, following a chain of great essays that started with Zombie Zombie, went on to Macaroni-i, and makes its latest stop here. What Serenyty does is introduce the idea of risk, as discussed in her media classes.

I’m more of a Hobbesian when I think about the idol world, so when I hear risk I tend to think of game theory and Von Neumann and zero-sum games. What Serenyty puts forward is somewhat different, but based on a similar idea: that media companies try to minimize losses and maximize profits by guessing what will appeal to the widest audience possible.

I’m sure some of you are thinking, “Of course, these ideas are common sense, anyone can see that.” But I’m guessing if that’s the case, then you’re not one of those wailing too loudly about Morning Musume. And if you’re one of those who does wonder about why the group isn’t as popular as they used to be on television, I’m not sure if this theoretical framework will make you go, “Oh yes, I see, I understand. Uh-huh. Okay, that’s completely fair.”

You may want to argue other aspects of Morning Musume which have added to its novelty in more recent years – the inclusion of the Chinese members, or of a semi-competent shark-girl, for instance. Or you may even point at how the OG Musumes – now known as Dream Morning Musume – have continued to receive fawning attention from certain corners of the entertainment industry, most notably the Utaban duo of Ishibashi and Nakai (who once used the OGs to ignore the new Musumes in a rather brilliant episode). You can also argue that by the end of this year Morning Musume’s line-up will be so changed and young and different that it can again qualify as a “new” group that’s less of a risk. (I’m almost ready to believe that, if the pesky name of the group didn’t hold such a legacy…)

Whatever the case, there’s now a framework to contend with, a shared idea that can explain and complicate one’s point of view and which does, indeed, make a lot of sense. Serenyty has done us all a favor by providing that, by adding to the ongoing dialogue in a manner that will pay off in dividends as our discussions of idols deepen and become more sophisticated.

As Serenyty herself points out, this theory extends to a good deal of how the media works, and Hello! Project has been using this principal of risk as well – how could they not? In effect, H!P’s own attempt to reduce risk by keeping Morning Musume dependent on Takahashi Ai for its lead… Which actually connects quite nicely to a recent essay that Jess wrote at Happy! Go! Lucky! And so there we go, this framework is already helping us out even more!

And it does raise a larger question: when does being MORE risky become a benefit instead of less? At what point is being safer and appealing to the same demographic with what they expect no longer the right call to make? And is Morning Musume at that juncture now? I’m glad that there are dedicated H!P bloggers out there who are ready – and equipped – to handle such questions.