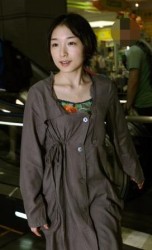 Further details have been revealed, very little of which can be called encouraging.

The best news is that Kago is in good enough shape to leave the hospital. However, it has been revealed that she had cut her wrists while under the influence of a tranquilizer overdose and doesn’t even remember doing it. As a result, she’s being placed on suicide watch and will not be left alone.

If anything, it is the lack of control which makes Kago’s current and recent situations so profoundly disturbing. She did not choose to cut her wrists, but did so in a stupor. She was being treated very shabbily – even immorally – by her agency, who should be better than that. And her agency continues to accuse Kago’s boyfriend of asserting mind control over her.

We will continue to post updates and reactions as they occur.