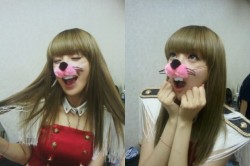 After School’s Jooyeon goofs around with a bunny mask – allkpop
This reminds me of that fucked-up bear scene in THE SHINING. Hello, soft-off.

Info: After School’s Japanese Version of ‘Diva’ – AfterSchool ❤
The changes inn the line-up will make this Japanese version quite different and worth paying special attention.

Check out the results for the Sanrio Character Ranking 2011!! – aramatheydidnt
Hello Kitty only placed third? What justice is there in this plush world?

SNSD’s Yuri reveals Sooyoung took a cushion from the airplane – allkpop
Never mind that! Who pulled the DO NOT REMOVE tags off everyone’s mattresses?

KARA – Step
Greg finds the KARA formula intact, and quite enjoyable as a result.

I was really hoping for a better PV – Janakya Mottainai
It’s great to see a contrarian opinion on this PV, as AimxAim calls it out for being lazy.

Fairies leave me wanting more -Janakya Mottainai
Aim likes what she sees, though the pecking order in the group is pretty damn clear.

Nogizaka46 variety show to start in October – Tokyograph
At last! The new pop overlords are waiting in the wings!

Wasureranneyo- ＣからはじまるＡＢＣ Revisited with more breasts – Neaux Clicked On It
This works as both ironic commentary AND as grade-A fapping material! A win for everyone!

Most impressive physical features in Anan magazine – aramatheydidnt
I was seriously hoping for more below-the-waist shots.

Which group comes to mind when you think of ‘Johnny’? – aramatheydidnt
If this was Gilligan’s Island, Arashi is Gilligan, SMAP is Skipper, and all the other groups are The Professor and MaryAnn (a.k.a. “and the rest”).

Just how big is Shindong’s head? – allkpop
Take One: I see the words “dong” “big” and “head” and… this isn’t what I was hoping for.
Take Two: They should’ve used a fucking iron! But even then, this passes the Ironhead Test!