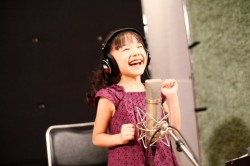 Ashida Mana set for solo singing debut under Universal Music – Tokyograph
Mana was quoted, “I’m going to rule the charts! AKB and Arashi will be CRUSHED beneath my cute heels!”

The Wonder Girls to release new movie and album in the States next year – allkpop
Slow and steady seems to be winning the race here.

Goto Maki, Ayanokoji Sho team up for new song – Tokyograph
This is the best thing either of them has done in a LONG time. Simply fabulous!

KARA gets praised on Ryan Seacrest’s blog! – allkpop
Are we sure he wasn’t talking about DioGuardi?

Shibata Ayumi Solo Debut Single Announced, “Believe” – Hello! SayuNii
Another Melon is back in the field!

Center Stage: GP Basic Greats Arirang’s “Pops In Seoul” – Bump This
Ishibashi and Nakai would have eaten them alive.

Momusu’s channels their weirdness for new PV – Janakya Mottainai
AimxAim is delighted by how inventive and cheap this video is.

Fairies-Song For You song and PV preview – Janakya Mottainai
Aim is less impressed with the matching A-side to “More Kiss”.

Angela Aki to be a Mom – aramatheydidnt
Congratulations to the proud parents-to-be!

J-Music Clip of the Week – Your Opinion Doesn’t Count
Shokotan versus Right Said Fred? But it needz moar cat-eating.