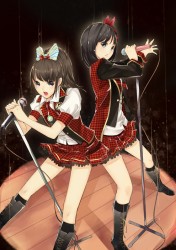 Pic of the Day – Your Opinion Doesn’t Count
My kind of Takitty tribute.

Takahashi Ai and Niigaki Risa Hotexpress Interview – Chuu Sugoi Idol
There’s a point in the interview where it looked like secret lesbian experimentation would be confessed… But alas, no.

Hey! Say! JUMP keep on moving in new PV – Janakya Mottainai
Greg and Marcia used to make out behind the scenes, it’s only fair we see the same in this video.

A group of idols on NHK documentary? Only this senpais can do it ^^ – aramatheydidnt
The film crew followed them around for two months just cause they thought Tsuyoshi’d do his nekkid drunken dance again.

KARA’s Gyuri and Super Junior’s Shindong have a friendly bet – allkpop
They should have a REAL bet where winner chops off the loser’s thumbs or something.

STRUGGLE FOR THE JE THRONE: Iijima (Left) and Julie (Right,… – Cho Scandalous
In keeping with the spirit of Johnny, they should have a contest to see which heir can ravage the most Juniors in the shortest amount of time.

Gender Bending Thespians Confuse and Amuse – aramatheydidnt
A wonderful guide to that wonderful art form of the Takarazuka.