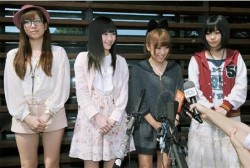 Chaotic Scenes Forces AKB48 Shanghai Event Cancellation – IXA Ready
A sad turn of events, though the safety of the idols must always be paramount.

Happy happy birthday, my fabulous queen – idol love
One of the best birthday tributes to an idol of all time. Even when punches are pulled, it’s hilarious.

B2ST, TEEN TOP, and more to play charity concert for children in Japan – allkpop
Oh yes, that hallyu wave is SO evil.

Which young male actor do you want to become your pet? – aramatheydidnt
You mean who I want neutered and fed random pieces of horsemeat for the remainder of its life? ALL of them.

BeriKyuu- “Amazuppai Haru ni Sakurasaku” HQ Radio Rip Released – Hello! SayuNii
ladylibra92 is relieved by the lack of solo lines and surprised at how light-hearted the song is.

DJ Hello Kitty Performs at New Shibuya Store – aramatheydidnt
Later, she was kicked out after being caught snorting blow in the bathroom.

KARA reveals how they keep their popularity with male fans – allkpop
Really? Honestly? Is that a concern? “Oh we’re so hawt and shake our butts, guys won’t like us?”

Ga-In’s Hot pink photos receive attention – allkpop
If I squint a little, I think I can see the hot pink beneath her hot pink sweater’s hemline.

any dirt on other non-JE celebrities who are huge bitches/douchebags? – Cho Scandalous
I like how they turn the question around to make a point.