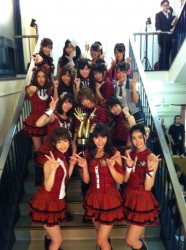 Wow, THAT’S a surprise. I seriously, seriously expected some AKB idol who I’d never heard of, who had never had a solo line in an AKB single, to be the winner. I was all set to write a post about how the janken tournament is the existential nightmare of AKB, where training no longer matters and popularity doesn’t matter and all you’re left with is blind, stupid luck.

Which I guess is still true. But apparently, luck can shine just as much on the beautiful and popular as it can on the ignored and unwanted. This is a Cinderella story where Cinderella was already chilling in the castle and had her choice of princes to marry, only to have her fairy godmother make her life that much more wonderful. And it is an assurance that, yes, all is right with the world and there is a greater order in things and that greater order has Shinoda smack-dab in the middle where she belongs.

IXA Ready and yonasu.com have the breakdowns on the different rounds. To my surprise, I recognized three of the final four. It looks like the Powers That Be won’t have to slough off the single that this tournament spawns, it can be treated like most any other AKB release as it has enough starpower and familiar faces for the general audience. It will be interesting to see if there is indeed a marked improvement between this year’s janken single and last year’s as a result.

One last thing that comes to mind is that there’s been talk of Shinoda graduating AKB since… well, for a long long while now. This would be a great way for her to leave in style, wouldn’t it? Or maybe this can be a foothold for her to go All The Fucking Way and win the senbatsu election next year! If she starts a campaign that points out winning the janken makes her the true anointed one of AKB, maybe she’d have a chance?

So congratulations to the senbatsu, and especially to Shinoda!