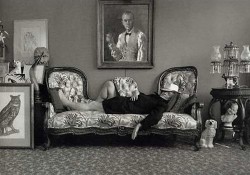 Here’s an interesting news piece from allkpop: Boyfriend “feels” they appear more masculine with their latest comeback. Ho-lee shit. If you have to “feel” it, then you’re still a bunch of pansy fucking sissy boys! Everybody knows real men don’t feel!

To help along with the hilarity, here’s a great quote: “Instead of flashing his signature smile, Kwangmin now opts to speak with his strong gaze instead. “I’ve cut my hair shorter and practiced making masculine facial expressions every day,” he revealed.” So… is that strong gaze anything like Blue Steel from Zoolander? Isn’t a strong gaze more feminine? And if you have to PRACTICE making masculine facial expressions… methinks thou doth protest too much, eh?

Also, I guarantee you this: if you show your typical non-idol-loving person, male or female, these new pictures of boyfriend, “masculine” is NOT the word you’re going to get right away. If anything, they look like a hunger-starved pack of metrosexual rent boys looking for their next tricks.

And almost immediately after chuckling through this, I ran into the above article on actor So Ji Jub and the description of “a suave and masculine look”. Oy. If that’s masculine, then this portrait of Truman Capote is positively dripping with testosterone.

So that got me to thinking about masculinity and just how important it is to boy band idols. I would say it ranks somewhere below finding the proper hair gel and getting enough sleep. And if anything, it brings up a huge disconnect between cultures, I think, as well as between the fantasy of idols and the reality of everyday life.

First, we should make a distinction between masculinity and sexual orientation. Some of the manliest manliest men I know are interested only in sucking and fucking other men, while some of the most feminine men I know pine away constantly for the touch of a female. Masculinity is merely how much one projects a certain kind of image associated with fixed gender roles.

I repeat: it’s an IMAGE, nothing more, nothing less. Most people WILL make jokes about sexual orientation based on how masculine an image you project – Lord knows, I’m more prone to such jokes on this site than others – but enlightened folks know that the link in this day and age is tenuous at best. (So why keep making those jokes? Because they make me laugh.) I may joke about how sissy Boyfriend look when they’re trying to be butch, but I make no assumptions that they’re interested in males or females.

Second, we need to consider that the criteria for masculinity may be quite different from culture to culture. At least, apologists for the rather fey and by-Western-standards feminine looks of many Asian male celebrities often stress that such a look is actually quite masculine by Korean and Japanese standards, or so I’m told. That probably has to do with the entertainment industry in general. Even someone as hunky and rough-hewn as Abe Hiroshi still has a certain metrosexual veneer to his grooming, after all, and he wears it quite well.

That said, I still find it amusing that Boyfriend not only thinks their new look is manning up – were they wearing dresses and heavy eyeliner last time? – but that they feel the NEED to insist that’s the case. After all, their target audience LIKES males idols who aren’t so masculine, who project a certain ambiguously gendered charm. With all the elaborate make-up and suggestive poses and yaoi-inspired fantasies about intra-group canoodling, I think it’s wiser to embrace that kind of mentality and glam it up some, to play with expectations and let that touch of queerness drive the fangirls wild. Would a hyper-masculine boyband really work, or would they just alienate the potential fan base?

I think we can still productively discern between different types and levels of masculinity in male idols, as well as whether or not they project a queer orientation (as opposed to actually being queer). For example, consider those weird-ass Super Junior Mister Simple concept photos. Far and away, the most masculine looking image is Siwon’s – he’s got the abs, he’s got the glare of a predator, and the dong bulge – but it’s also the most blatantly queer image, the come-on feels very tuned in to a gay male fantasy. Meanwhile, Leeteuk is one of the most feminine looking from these concept photos (along with Eunhyuk), with the blonde pageboy hairstyle and multicolored tubetop, but doesn’t project queerness at all – just some very unfortunate stylistic decisions. If both these fine, strapping young men stepped into a gay bar dressed as they were, Siwon would be mobbed with offers for nooky, while Leeteuk would merely be teased mercilessly for lacking proper fashion sense.

Anyways, I wish Boyfriend good luck with their manlier approach. If it helps generate more sales, great. If not, you can always go the opposite route and do some drag queen sexiness. Lord knows, I’d pay more attention if that was the case.

One Response to Masculinity And Idol Boy Bands – The Eternal Struggle