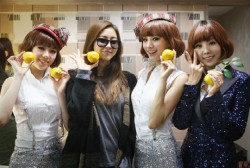 Twitter Update: Lizzy “Don’t Throw Candy at Me…” – AfterSchool ❤
For a well-rounded diet, fans should throw meat, vegetables, and dairy products as well.

News + BTS Flick: U-ie Cheers on Orange Caramel – MuBank Comeback Stage
UEE then proceeded to pelt Lizzy with the oranges they were posing with, shouting, “How do you like THAT, bitch?”

Orange Caramel – Shanghai Romance – Music Video Review – I Am Ipodman
I agree with the lukewarm review, this MV needed more of Lizzy getting hit with food.

What are the reasons behind Orange Caramel’s success? – allkpop
I like how it breaks down the trio: Raina = talent, Nana = looks, Lizzy = target practice.

SCANDAL: New Tour, New Look – Pure Idol Heart
Alas, the new look is NOT “Village People” like I hoped for.

JAV Parody of Ponytail to Shushu – aramatheydidnt
I couldn’t tell this apart from the real thing.

Otokogumi, Rocking It Old School – Never Ending Music Power
A fascinating profile on the father of a Hey! Say! Jump member and his old buddies.

Oshima Yuko debuts furisode line OshimaUco – MELOS no Michi
She’s just too cute in those outfits not to share here.

Saito Hitomi and Hachimitsu Jiro Have Divorced – Hello! SayuNii
So is this gonna mark her return to the entertainment industry?

Why are K-pop concerts so unorganized? – Seoulbeats
Another disastrous show leads to some questions of poor planning.

Sexy Zone is making you pony up your cash. – Never Ending Music Power
Thennary Nak shares the details on their debut release in all its many formats.

Impossible choices – Kamichan
Ah, the familiar lament and calculations of a fan trying to make a budget.

L’Arc-en-Ciel’s hyde reveals he accidently confessed his love to KARA’s Nicole – allkpop
He thought she was a member of Laruku now, so he just said what came natural.

BoA announces her next Japanese single, “Milestone” – allkpop
Really? Haven’t we had enough of the hallyu wave without these latecomers?

All 5 DBSK members unite to record ‘MAXIMUM’?
This reminds me of that duet Natalie Cole did with her dad after he died, but with more exposed abs.

Naughtier than You Perceived? – Afilia Saga East – Okay! Musume Time
A great profile on the group AND a helpful guide to all the good parts in their PVs!