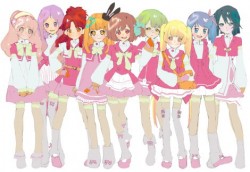 AKB48 to get their own anime – MELOS no Michi
Hopefully, they’ll stick a nuclear reactor in Acchan’s belly or something.

Radio Preview for Momoiro Clover Z’s Bionic Cherry Released! – Happy! Go! Lucky!
Jess is pleasantly surprised with the song, not so much with the “drunken salaryman” pics of the girls.

Fun fact of the day: Did you know that back in the 80s,… – Cho Scandalous
I did not know this!

… there was a black guy in Johnny’s Jr?WHY… – Idols and Hollywwood
Nor did I know this! We learn something new every day, eh?

JYP Entertainment clears information regarding Wonder Girls’ comeback – Koreaboo
A more contemporary urban style is promised, which has me intrigued.

Sayuminglandoll – Hello! Blog
Anyone else amused that it takes this slice of scrumptiousness to bring Paul back to his blog?

AKB48′s Suzuki Mariya stars in first horror movie – Tokyograph
She’s been able to avoid scream queen duty up until now? How was that allowed to happen?

Tumblr Update: Bekah Gets Honest with PlayGirlz ♥ – AfterSchool ❤
Not exactly surprising, and it’ll be interesting if Bekah decides to speak out some more.

The 30 Day Idol Challenge: Day 1 – Janakya Mottainai
It’s nice to see the meme still has a good deal of life in it! Maybe I should do it next.

SNSD introduces 3rd album, “The Boys”, in English – allkpop
I found this quite charming, in a way.