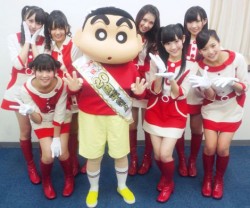 Watarirouka Hashiritai 7 New Single to be “Crayon Shin-Chan” Opening Theme -MELOS no Michi
All the Mister Elephant Dance jokes available to me are just overwhelming…!

Girl’s Generation’s “The Boys” MV receives 6.5 million views in 2 days – Koreaboo
A great sign for SNSD, but will it translate into sales?

Teddy Riley says he wants to work with BoA – allkpop
So let’s wait for the announcement… five, four, three…

Kimura Takuya pimps Nikon’s new line of “1” cameras – aramatheydidnt
I have to admit, Kimutaku does a mean Michael Jackson homage. He should do Dueling Michaels with Goro.

Peach John Fall 2011, Vol. 78 Catalog – aramatheydidnt
So do the AKB girls measure up against other Peach John models? Find out for yourself!

Mina’s Confession on AKB Confessions (on Tumblr) – Wota (in training)
The problem with confession is that it can’t be unheard.

Fujie Reina Stars in 3D Horror Movie – MELOS no Michi
But will she do at least one bikini scene to make full use of the 3D effects?

Be-ppin’s MY･EYE･AH PV + information – aramatheydidnt
Given that promo picture, does it REALLY matter if they can sing?

After School’s Kahi going back to school? – allkpop
Good for her!

Only 3 members of Big Bang to perform at 2011 K-pop Super Concert – allkpop
If I was the remaining three, I’d be verrrry careful and not tempt the fates.

A Review of Morning Musume’s new album ’12 Smart’ – The Blogpower!!!
A quick track-by-track from Kath with an overall favorable review.

A brief look at half and mixed Johnny’s (Juniors) – Never Ending Music Power
A handy guide for the curious.

Is 2NE1 Relevant in Japan? – Seoulbeats
A consideration of how good a fit the YG group is for the popular trends in Japan.