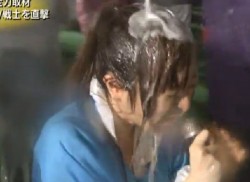 Clip of the Day – Your Opinion Doesn’t Count
Count on Langdimus to make something that just seems stupid into something ridiculously perverted. Bravo!

BTS Flicks: After School in Japan – Tap Session – AfterSchool ❤
I know before that I said this gets me excited, but… yeah, I’m still excited about this.

KBS president under fire for banning “Pierrot” – allkpop
Not a surprise, but will this help JYJ’s media relations with the folks who schedule them for shows?

[IV]Ai Shinozaki ~ Magical Eyes – Jappydolls
Yes, because it’s her EYES that everyone focuses on.

Pic of the Day – Your Opinion Doesn’t Count
That friend looks like a weird life-size sex puppet for loli-gyaru fetishists. Get her into eleventh gen ASAP.

A.N.JELL with TBS drama “Ikemen Desu ne” Music Collection Covers + Tracklist – aramatheydidnt
Come on, would a guest vocal by Miori’s old idolmates be too much to ask for?

Shibasaki Kou forms new musical group with DECO*27 and TeddyLoid – Tokyograph
Hopefully this will go as well as her solo music career.

Watarirouka Hashiritai 7 New Single Announcement!– MELOS no Michi
For this PV, Mayuyu will have to master waking and chewing gum – AT ONCE!

Goo Hara’s past modeling photos surface – Koreaboo
I usually like the more loli version of an idol, but Goo Hara is hawter grown up.

SNSD’s Shorts: Hot or Too Short? – allkpop
Never mind how short – how much cameltoe are we getting?

Japanese celebs involved with Yakuza – Cho Scandalous
Hey, if it was good enough for Sinatra…