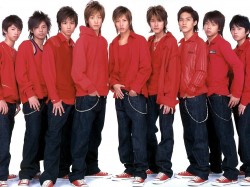 Comments from Yamapi, Ryo Nishikido, and NEWS members – MomoEdgewood’s Mediawatch
Each of the members get to have their say; it’s interesting to see how each approaches this.

And then there were four. – Never Ending Music Power
Thennary Nak reacts to the news, and on supporting NEWS in the future.

THE END IS NIGH FOR NEWS – Cho Scandalous
CS shares some of the 2ch chatter about the announcement.

Pic of the Day – Your Opinion Doesn’t Count
Goddamn – Saki may not be stacked, but she knows how to work it.

Nonsensical Korean lyrics in K-Pop songs receive attention – allkpop
Yeah, this was funny sixties years ago, too, with “Louie Louie” and “Who Put The Bomp”.

Fairies become youngest girl group on the airwaves – Tokyograph
They inched out SPEED by THAT much… But SPEED has hiro and Takako, so they still win in the end.

T-ara’s upcoming MV is 30 minutes + Where the @#$% is my SNSD Blu-ray? – I Am Ipodman
Ipodman shares some thoughts on how a movie with a real narrative makes sense.

KPOP 101: Meet the members of U-Kiss – Koreaboo
A nice little primer for those of us who don’t know this group? Where do they fit on the Heart2Heart scale, though?

Hot or Not? Actress Oh In Hye’s red carpet dress stirs up fierce fashion debate – allkpop
I don’t know who she is, I just want the shots where the cleavage drops completely.

Rookie female group Stellar takes a photo with Alex – Koreaboo
I miss them. I want more from them. Soon.

(1) Asked and answered with respects to Dots. I’m guessing… – Cho Scandalous
A professional working relationship with no drama? How fucking boring must THAT be?

MBLAQ’s Mir reveals his baby picture and shows off his growing comic book collection – allkpop
So I wonder if he tried the New 52 and liked it. Probably not.

KARA to guest in 100th episode special of ‘Dream Team 2′ – allkpop
Doesn’t that outfit make you think of a blue I Dream Of Jeannie?

Base Ball Bear- Tabibito in the Dark clip – Neaux Clicked On It
A great preview clip from the popular band’s next single.

I Believe in GD – HallyuSurfer
An emotional plea for Big Bang to survive their latest travails.

Heart2Heart – ineffective (well…to me) – Tin Tee Treehouse
Wu shares his thoughs on the American boy band and the cyclical nature of pop.