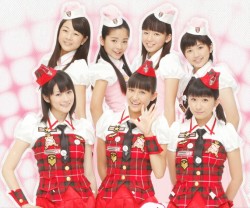 You know, there’s a remake planned for “A Chorus Line” where everybody makes it into the play. And there’ll be a new version of The Highlander whose slogan will be “In The End There Can Be Only… Everyone”. And this year, the NFL has decided that the Super Bowl will feature all the teams, not playing against each other, but hugging and tossing the ball around for shits and giggles.

And in related news, the four sub members of S/mileage have all been declared full members. In conjunction with this boon from above, S/mileage have declared a new single with the now-solid 7-nin line-up.

The reactions in the wotasphere are split between those who are relieved and happy that all the girls made it – the crews of Hello! SayuNii, Chuu Sugoi Idol, and Pure Idol Heart – and the heartless bastards who wanted to see blood, tears, and at least one loser shamed into the Eggs or something – Selective Hearing, Happy! Go! Lucky!, and Intl Wota. And from the way things sound, nobody who was paying close attention was at all surprised by this outcome.

As a result, Greg of SH and Jess of H!G!L! have the most entertaining reads so far on the topic, Greg fulminating at the waste of sturm und drang on the false suspense, Jess taking some funny potshots at Rina. (Hey, she’s a full member now – no mercy should be spared once you’re a real idol.) that said, Ayuchii’s generosity of spirit has also led to an interesting interpretation of the new single and its possible significance for the second gen members.

Long-time wota are used to getting their chains yanked on a very regular basis, and it isn’t that some of us are so mean-spirited and petty that we want to see certain little idol wannabe’s crying out of whatever good eyes they possess. Well, okay, maybe some of us DO want that to happen. But if anything, I think much of the anger and frustration is directed at Hello! Project and the powers-that-be for creating this farcical notion of sub members in the first place.

It was a controversial decision, feeling as it did like the kenkyuusei of AKB48. Nobody seemed particularly happy with it, already suspecting that familiar pull of the chain on our much-abused genitals. However, making the best of the stupidity, some of us decided, Okay, prove this sub member thing is meaningful then. Add a new level for these girls to prove themselves, a dramatic turn where these idols-in-training have to prove their mettle. If you’re gonna go Darwinian with the sub title, then make sure it IS survival of the fittest.

But as it turned out, Hello! Project and its powers-that-be Pussied Out Big Time. And on a practical level, the only major test that the S/mileage sub members had to endure to make it through to full membership was the challenge known around the world as “stay healthy”.

So congratulations to the new members for living with the false drama for some months. As for myself, I’m gonna wait about giving a damn till Meimi and Akari grow some into their natural hawtness. So I guess that’ll be six or seven months? Cause they’re ripening into pedoliciousness already, I think.