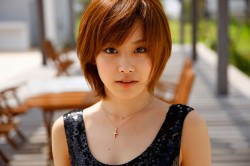 Here is an interesting, if a bit fluffy, piece on the potential Jpop has to become as major a global force as Kpop and the much-vaunted hallyu wave. The author, Takamasa Sakurai, is said to engage in “pop culture diplomacy”, and notes through personal anecdotes how he saw the popularity of Kpop rise over the years in various Asian countries, eating away at the market share Jpop once had (and even more interesting, of Jpop being supplanted by anime and manga). Believing that Jpop could make a comeback, Takamasa decides to ask an expert, former Morning Musume leader Takahashi Ai.

Ai shares her thoughts on the matter; the most important point she makes, and it strikes me as a very Takitty insight, is not only do Korean artists want a global audience more than Japanese artists (which I find questionable, though the Kpop industry is certainly more aggressive than the Jpop industry) but the fact that so many of them do means “it may be easy to work toward the goal together”. That is, teamwork among the idol groups spurs everyone forward – which is how she ran Momusu. Certainly, that is seen in the “family” shows where many artists from the same company perform together, like SMTOWN and YG Family. On a practical level, it also establishes an infrastructure that can be used to build a sustained relationship in overseas venues, as opposed to one-off deals that have to be built up from scratch each time.

Takamasa is very optimistic about Jpop’s chances and would make a great booster for industry-wide movements to promote Cool Japan across the globe. Having said all that, and genuinely liking both the overall message and the distinct perspectives shared in this piece, I’m disappointed in the actual argument that’s formulated. It’s too simple, it doesn’t consider the problems in making these comparisons between Kpop and Jpop, and is just too glib in its conclusions.

First off, just because it needs to be asked, What the hell does Takitty mean about the height of Japanese idols and how they vary? Is she claiming this is unique to Japan, that other places require a more uniform height among the members of their music groups? Or… really, what the hell? It makes no sense at all. And even if it’s true, how in the fuck can varied heights of group members be marketable?

Further, I’m surprised that someone committed to such admirable activity as “pop culture diplomacy” as Takamasa doesn’t describe the complexities and nuances on why Kpop is doing so much better globally than Jpop right now. He boils it down to the idea that Kpop is doing better internationally because they want the global market and Jpop doesn’t. I’m pretty sure Akimoto Yasushi would have something to say about that, as would UFA and Utada Hikaru and the sponsors of the Japan Nite tours. (For that matter, why not give some credit where credit’s due and point out Dir en Grey has probably made more in-roads with an international audience than any other current Japanese musical act?)

And are the idol music of Kpop and Jpop so interchangeable that it’s JUST a matter of “wanting it” that keeps Jpop from making the same in-roads Kpop is making globally? I find that implicit simplification problematic, to say the least. Any reasonably thoughtful consideration of the global hallyu wave points out key differences between Kpop and Jpop that gives Kpop an advantage on the international entertainment stage.

To take it back to our own American-centric perspective, I have to say I’ve changed my mind on how accessible Jpop idol music can be in the United States. I now believe it CAN potentially go beyond the anime convention circuit… all the way into the tween Nickelodeon / Disney circles that the Wonder Girls are now pioneering. If they click, then I can see the likes of the newly pedofied Morning Musume and Momoiro Clover Z and bump.y doing guest appearances on Victorious or touring with Big Time Rush. (On the Korean side, GP Basic would be a natural fit in those environs!) And if that doesn’t work, there’s Anime Expo and Otakon…

But I still don’t think Jpop idol music can break into the mainstream of the American pop charts, even less so than Kpop. Kpop idols are a more direct offshoot of American music and has a visual aesthetic more in line with pop music tastes here. Jpop idols are – by American standards – too alien and too laughably bizarre (and probably too unabashedly pedolicious) to be anything more than a novelty to the mainstream U.S. market, another example of that dread LOL Japan.

Though actually, now that I think of it, one idol group COULD do it – Perfume, whose look and sound is gimmicky, but in a way that COULD click with the American mainstream. Not that Perfuem give a shit about the American market, though they’ve had more mainstream exposure than most thanks to AMERICAN DAD and CARS 2. Beyond that, I think the three major diva of Avex – Koda Kumi, Hamasaki Ayumi, and especially Amuro Namie – could have a fighting chance if they want it, but it’s for the same reason Kpop has better chances: similar Westernized sound, similar visual aesthetic. But that won’t happen, either, they’re all quite comfortable on their current perches on the Pacific Rim to go beyond those confines much.

One thing’s for sure: Jpop is behind Kpop right now in world recognition, but Japanese pop culture still has strengths it can draw upon – particularly the sustained popularity of anime and manga. That edge could be used to further spread Jpop idol music – carefully, in the right demographics – if that’s what the industry movers and shakers want. How badly they want it, though, is still open for debate and not very encouraging. After all, the potential is always there – it’s just a matter of whether or not that potential is properly tapped.