By Ray | October 29, 2011 | Comments Off on The International Hallyu Wave: Threat Or Menace? 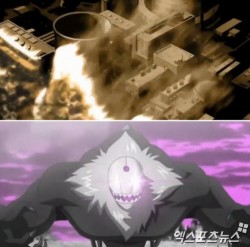 2NE1′s “Hate You” Music Video stirs up controversy in Japan – allkpop
EDITORIAL: Popularity in Japan taken for granted because of Hallyu? – Koreaboo
K-Pop in Southeast Asia: Is Hallyu really a threat? – Seoulbeats

I’m not sure if the anti-hallyu movement is heating up or just being louder and more annoying, but it seems they’ve found a new reason to cast suspicion on Korean entertainment in Japan. Specifically, there’s criticisms that 2NE1’s PV for “Hate You” is anti-Japanese because: one, it depicts a nuclear explosion, which critics say refers to the Fukushima tragedy; two, a giant robot the girl group kills in the video has a red circle on its forehead, which “of course” refers to the Japanese flag.

Watching the video, it’s clear that 2NE1 are paying homage to Japanese anime, one of the major global entertainment forces in the twenty-first century. I would say that in that respect, 2NE1 and their handlers are guilty of lack of forethought but certainly not malice. Doing a nuclear explosion a la Akira or Neon Genesis Evangelion or any of a dozen other classic anime may be iconic and bring a nod to many an otaku’s head… but yeah, it may still be too close to Fukushima to not be considered a bit callous. It’d be like having an American music video with planes exploding in 2002 – the wounds would just be a bit too raw, and YG and 2NE1’s managers should have considered it.

As for the red dot on the robot’s head, that’s just a fucking stretch of imagination. If anything, it made me think of a bindi, which I’d argue is in keeping with 2NE1’s global sense of fashion. But if you’re going to make accusations, you might as well go for broke and pull out whatever random shit you think will help you, right?

And on a purely editorial note, I find it amusing that allkpop asks, “Are people too over-analytical and is this controversy overblown?” Well, yes and yes – but if anything, allkpop is over-analytical and overblown in the opposite direction, finding depths of profundity and beauty in ordinary celebrity photos and overhyping the positive spread of hallyu every chance they get. So sauce for the goose and all that.

The anti-hallyu has been especially worked up as of late, what with the emperor’s grand-daughter making clear her own love of Kpop and the charts burning up with Kpop acts, including 2NE1. While it’s unfortunate that recent events with Big Bang and now 2NE1 (both YG artists, though I think that’s coincidence) may give the movement more ammo to oppose the hallyu, it can’t help but be a losing battle in the long run. Kpop has become too much a presence in the Japanese music scene to be wiped out or even diminished, even if a few acts take a few hits. I have no idea how 2NE1 will fare because of this, though I think they’re popular enough that this should blow over in a matter of weeks. Personally, I like the PV enough that it’s making me like the song more, which is funny since 2NE1 hasn’t done anything for me until now.

And of course, just because this insult from 2NE1 is mostly imagined and overplayed, it does NOT mean that there aren’t legitimate concerns about the hallyu and how it’s making its mark internationally. Two excellent articles deal with different aspects of the hallyu in Japan and in the rest of Asia.

First up is an editorial from Koreaboo’s TwistedInsanity, which looks at how quickly Kpop acts are trying to break into the Japanese market and finds that many acts are not making the proper effort and perhaps flooding the market as a result. Two groups are singled out for being more professional in their handling of a Japanese music career, Supernova and The Boss, the latter taking time to learn Japanese in order to better promote themselves. (KARA are another example that comes to mind.)

It’s an admirable argument, though expecting an entertainment company not to take the easy way out is a bit optimistic – the sooner you can cash in the better is a pretty common mantra in show biz, no matter where you are. As for this casual flood of Kpop in Japan leading to a backlash – well, we’ve got it already, don’t we? It’s just a matter of whether or not the backlash is a vocal minority or a growing presence in the entertainment world. If the latter, I think the groups that have made a real effort to fit into the Japanese entertainment world will benefit in both the short and long run.

Meanwhile, Seoulbeats’ Ree has a wonderful, well-detailed article looking at how hallyu and its impact on other Asian countries, including Indonesia and the Philippines. Examples of hally-influenced I-pop and P-pop are presented, and an understandably complex assessment is made about how native music still manages to sustain itself in the face of Kpop and the even larger presence of Western music, and that if it seems to be overwhelmed by international music that has more to do with the weakness of native artists than the hallyu. Ree not only identifies embarrassing knock-offs of Kpop in other countries (and even name drops Heart2Heart), but also examples of musical creativity and ingenuity. The balance and complexity is admirable, and I think presents a true picture of how Kpop is truly making its presence felt without being a threat or menace of any sort.

Hallyu has gotten popular enough that backlashes are to be expected – if anything, I’d take that as a testament to how powerful a force it’s become. There will always be those who feel threatened by something unfamiliar, or those who want to let past conflicts define contemporary culture, but that simply doesn’t work with the hallyu. Hallyu seeks to look forward, to be a progressive force – and while this is as much a commercial as an ideological decision (i.e., the end goal isn’t to unite the world but just sell a lot of records to the world), that only strengthens the message by bestowing on it the power of the free market. Mistakes and mis-steps may happen, and may even fire up hallyu’s opponents, but those setbacks can only be temporary as Kpop’s popularity continues to prove itself.