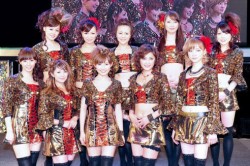 I love this post from Natalie mostly because I agree with four of the five things she doesn’t care about. Some people would take great issue with each of the things she dismisses, but in four of the five cases I think it’s a case of being pragmatic – either embracing the realities of the idol world or embracing the realities of being an overseas wota.

The first, and perhaps the most controversial, is that she doesn’t care about solo lines – and from there, I’d assume line distributions in general. I’m the same way and for just about the same reason – visuals mean a whole lot more to me than singing, by a very wide margin. The issue of fairness is roundly dismissed, and it’s for that favorite reason many self-aware wotabloggers are forced to trot out time and again: the idol industry just doesn’t care about fairness, especially if it gets in the way of profit. This often becomes a mantra when the latest “injustice” is bawled over, whether it’s someone’s favorite idol not getting any solo lines in a single or some sudden membership twist that leaves everyone wide-eyed and confused.

The second thing Natalie doesn’t care about is fan club stuff, and I think that just comes from not being able to participate in these things. Fair enough. The fourth thing is the metrics of Mixi, handshake events, and merchandise. She digs through the Mixi thing in enough detail to convince me, though in my case I must REALLY not care about it because I never ever consider it one way or another, not even enough to refute it.

The fifth thing she doesn’t care about is random management shenanigans to push a certain idol, and again we’re simpatico. I mean, management does what it wants to whenever it wants to, and to believe fairness ever enters the equation over profit is just ridiculous.

Now, the one point where I disagree with Natalie is number three, Dream Morning Musume. She writes, “we all know DMM exsist to do the nostalgia circuit and alot of the time they overshadow the normal Morning Musume”. For some reason, she sees both of these things as a negative – I see them as two stunning positives. After all, DMM is the line-up that won over the whole nation and performed the singles that remain most popular today.

As far as I’m concerned – and as far as the general Japanese public is concerned – Yuko and Nacchi and company ARE Morning Musume, and if they overshadow the current line-up then the current line-up should be responsible for a single as popular as “Love Machine” or “The Peace!”. And I know them’s are fighting words, but I’m just being pragmatic about what the brand of Morning Musume means to the general public and about giving those people what they want. Matter of fact, I’m surprised they haven’t put together a Monsters Of Idol Music tour with Pink Lady and Wink and Speed yet.

Of course, that’s all just my own opinions, but I think it came from the same spirit of pragmatism that seems to drive the rest of this post.

So… what do you all think? And what aspects of the idol world do you not care about?