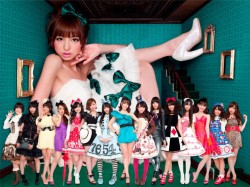 The Power Of AKB48 – Pure Idol Heart
Hey, I’d do anything to lick an AKB idol, too.

Why I Do Kpop Even Though Chuckleheads Keep Giving Me The Side-Eye – Kpop Kollective
A very useful lesson on the perils of essentialism.

Morning Musume – 9th and 10th Gen, Aichan’s long awaited Departure, Aika’s Injury – Kira’s Blog
Kira continues to catch up, sharing her opinions on the new members and the one who just left.

Abe Asami to tie the knot – Tokyograph
Congratulations to the bride and the lucky groom!

After School: Street Fashion Divas? – Seoulbeats
A look at how the style and sound of the group changed between the original single and the Japanese remake.

Pics of the Day – Your Opinion Doesn’t Count
Sola Aoi’s birthday? Time to celebrate with 28 faps!

AKB48’s Yuko to cosplay as Serah on Launch Event – aramatheydidnt
Let’s hope she learns some new uses for that big ol’ sword.

Big Bang still popular in Japan despite the bad press – allkpop
What I wanna know is if there’s an uptick in popularity with potheads?

Taiwanese girl group ‘Super 7′ accuse SNSD of being plastic – allkpop
This is like Michael Jordan being criticized for poor basketball-playing by Snooki.

What does it take to create an SM Entertainment K-pop star? – allkpop
An interesting look at the management and development side of the hallyu wave.

Berryz Kobou VS C-ute, Friends but Rivals! – Chuu Sugoi Idol
Oh sure, but that’s only if you ignore the after-hours knife fights.