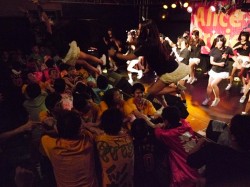 Sometimes opposites attract, and sometimes opposites have a way of uniting into something wonderful on its own terms. In the idol world there are many oppositions or things we consider on different sides of some imaginary line, but these three recent blog posts show that crossing sides can be very rewarding.

To start things off, Henkka of Beat Laments The World profiles the greatest new idol group since Stellar, Baby Metal. Or is it BABYMETAL? Anyway, he provides a good deal of information on the trio and praises their bona fides: “I have to say that that is by far the most authentic metal I’ve ever heard in idol music. It’s not just “kinda” metal — it’s there.” Strong words for a man as deeply rooted in metal as Henkka is, and Baby Metal does indeed deliver the goods. That said, the oddest dissonance in this pairing of idol and metal come in a live performance that Henkka links to – little girls doing a metal song is nowhere near as unnerving as an audience of much older wota cheering them on. I mean, it looks like half these guys are older than Lemmy.

Next up, Isilie of Itsumo Genki confesses her love for AKB48 through the TV series Majisuka Gakuen and how two particular AKB idols – Sae Miyazawa and Oshima Yuko – make her think of two of her favorite members of Morning Musume. I’ll leave you to read the article to find out who she pairs with who, but she not only explains why they remind her of these Momusu ladies but also reveals a good deal about herself as well. That personal element helps to elevate this piece, to make it a wonderful example of how idols are as much about the reflection they place on a wota as anything else.

Maddie of Seoulbeats has a very informative article about how KARA used a strong Jpop influence to make a name for themselves in both the Korean and Japanese markets, pointing out particular stylistic debts to the Avex Trax divas Amuro Namie and Hamasaki Ayumi. It’s a wonderfully written piece with a sharp eye for details, proving that KARA’s success on both shores is not some accident but a very deliberate plan.

The funny thing about these three odd couplings is that at least two of them have long histories of antagonism – AKB48 versus Hello! Project, Jpop versus Kpop. I don’t know if wota and metalheads ever came to blows, though I’m sure there’s a dirty joke buried under that notion. Main point being, these oppositions are in many ways false – a case of people choosing sides when none need to be taken.

So what further combinations are any of you seeking out? I want the first Sunn 0))) influenced idol girl group, complete with robes and brown noise musical stylings. Or the first real combination of gangsta rap and idols, maybe using G.P. Basic to do a medley of Wu-Tang Clan songs.