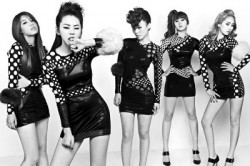 The teasers promised a fierce new image for the popular Kpop quintet, but did they also deliver a matching sound? Seoulbeats goes into how the two sets of teaser videos send very mixed signals and is curious about whether the girls will continue with the retro sound that has defined past singles or something more contemporary, as had been promised in press releases. allkpop reports that the girls are making use of their time in America, with the influence of club music making its way onto the album and Ye Eun writing the opening song.

What’s delivered with “Be My Baby” – a title which itself harkens back to Motown and The Ronettes – tends to stick musically to what the Wonder Girls have been doing all along, a whole lot of retro with some modern touches. The MV is unbelievably hot – especially Sohee – and makes very clever use of black-and-white with color effects. I could watch it for hours and never grow tired of it. The song itself is quite good on its own terms – if this is what we’d been promised, I could enjoy it a whole lot more. But I also would’ve loved to have a fiercer, more dynamic sound from the Wonder Girls, and “Be My Baby” ain’t it. So unfortunately, it DOES feel like a bit of a bait-and-switch, and Seoulbeats was dead-on in expressing serious misgivings.

The wotasphere is reacting in a mixed manner, though I think unfulfilled promises is strictly in the eyes of the beholder. The word “cute” is used often by both those who speak glowingly of the album and those with misgivings. At Not Another K-Blog!!!, kjpop notes the shift in the MV from comedic narratives to something edgier, and notices a Jpop flavor to the single. kjpop then goes on to do a track-by-track review of the full album, admiring how it follows the JYPE tradition of strong album tracks to complement the singles. Strawberrie is one of those disappointed by the promise of something different, but nevertheless finds the song cute. Neaux Clicked On It opines that the rap solo towards the end is where the song hits its stride. Ipodman finds the MV trying too hard to be edgy and dangerous, and the song lacking in “magnetic value”.

I’m hoping the song grows on me – the MV could sell to the American tween market without a problem. And I must admit, I can almost understand Wonder Girls’ handlers promising something different but not delivering. “More of the same” isn’t usually enough to get a music listening audience excited, even if that’s exactly what some of them want. However, WG are at a critical juncture in America, with their first album and Nick show in January; changing their act too much could be disastrous right before these events. And hey, aren’t those tween acts big on promising to be edgy and delivering watered-down crap? Maybe the Wonder Girls are picking up some wrong lessons from America, as well as the right ones. For now, it looks like Wonder Girls have something solid on their hands, but it isn’t the great leap forward some of us hoped for.

Tags: allkpop, Bump This, I Am Ipodman, Neaux Clicked on It, Not Another K-Blog!, Seoulbeats, Strawberrie, Wonder Girls

One Response to Wonder Girls Comeback Hits The Wotasphere