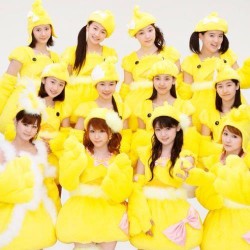 DMM preview and Takahashi – Shining Hello! Project
I know DMM responses were yesterday, but of course she would, she WORKS FOR THEM STILL.

Morning Musume’s “PyokoPyoko Ultra” Promo Picture & Tracklist Released – Hello! SayuNii
Is it me, or would these outfits work better around Easter time and with a marshmallow filling?

Mina’s Stand Out Songs of 2011 – Wota (in training)
Mina’s got an interesting list here.

2011′s AKB – My Single Ranking – Nearly an (W)ota
The top three and an interesting comment about a Worst Of list.

Japanese media criticize SHINee for using SMAP’s popularity for promotion – Koreaboo
Key even went so far as to run around in a drunken, naked stupor the night before.

AKB48 and SMAP to perform a Christmas medley on ‘SMAP X SMAP’ – aramatheydidnt
Actually, AKB are performing with SHINEE but there was a misunderstanding.

Koda Kumi confirms her pregnancy – aramatheydidnt
Well, THAT explains everything.

Kyary Pamyu Pamyu designs shampoo for Reveur – aramatheydidnt
But will it make you hallucinate are you clean your hair?

Community Article: Is Indonesia Ready – New School Kaidan
An interesting take on whether or not JKT48 can succeed.